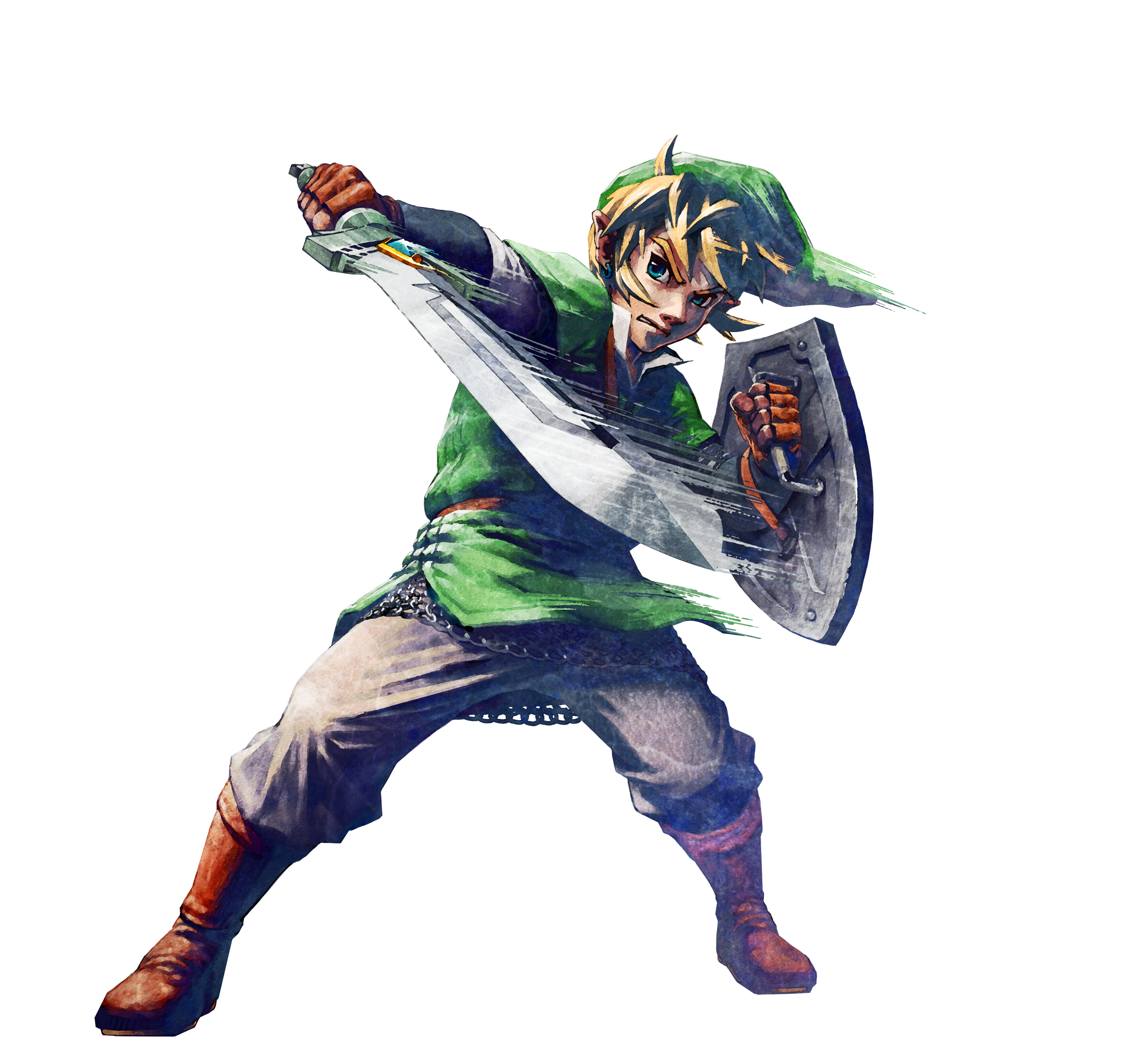 Artwork of Link from Skyward Sword

Link is the hero and main protagonist of The Legend of Zelda and starts off in the overworld. When Impa, Zelda's nursemaid, tells him that Princess Zelda was captured and split the Triforce of Wisdom into eight pieces, he embarks on a quest to rescue Zelda and defeat Ganon. Throughout his quest, he will have to collect heart containers and find new items to complete his quest. At the end, he puts together the Triforce of Wisdom, slays Ganon, collects the Triforce of Power, and saves Zelda and Hyrule.

Link is the hero and main protagonist of Zelda II: The Adventure of Link and starts off his adventure in North Palace, in front of the sleeping Zelda from the past. An older Princess Zelda wouldn't tell her brother, the Prince, the location of the Triforce. The Prince hired a Magician to interrogate her, but after being unsuccessful, he put Zelda into a deep sleep. Unable to wake her, the Prince put her in a tower. Impa, the Princess's nursemaid, informs an older Link that the only way to wake this Princess is to recover the Triforce of Courage. Ganon's followers are after Link, because they believe mixing his blood with Ganon's remains will resurrect him. Link is able to survive, recover the Triforce of Courage, defeat Dark Link, and awaken the Princess. 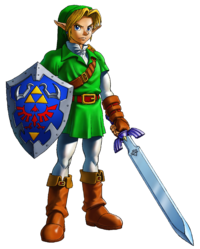 Link is the hero and main protagonist of The Legend of Zelda: Ocarina of Time, starting off as a Hylian kid living in Kokiri Forest. He gains the Kokiri Sword and Deku Shield and goes to the Great Deku Tree to break the curse on the Great Deku Tree. After he does, he gets the first Spiritual Stone, the Forest Emerald, and heads for Princess Zelda. Zelda tells him to find the other two Spiritual Stones and bring them to her. After he finds them, he goes to Zelda to give her the Spiritual Stones. However, Zelda is being chased by Ganondorf and throws Link the Ocarina of Time. She then telepathically teaches him a song that will open the door to the Sacred Realm and tells him to go there and get the Triforce before Ganondorf. He does so, without realizing that Ganondorf followed him into the Sacred Realm. He takes the Master Sword from its pedestal but it didn't recognize him as the Hero of Time because Link was too young so his Spirit was stored for seven years. He has to awaken five Sages to go to Ganondorf's Castle, save Princess Zelda, and slay Ganondorf.

Link is the hero and main protagonist of The Legend of Zelda: Majora's Mask and starts off looking for Navi in the Lost Woods. A Skull Kid wearing a mysterious mask and his fairies Tatl and Tael scare Epona and Link is knocked off, unconsious. Skull Kid steals Epona and the Ocarina of Time from Link and rides into the woods. Link follows, and learns Epona has run off, but Skull Kid still has the Ocarina of Time. The Skull Kid turns Link into a Deku Scrub and leaves him and, accidentally, Tatl, behind after leaving. Deku Link and Tatl go on to follow them into a clock tower. They meet the Happy Mask Salesman, who tells them that if they can get the Ocarina back in 3 days, before he has to leave, he can turn Link back into a Hylian, as long as he gets the Skull Kid's mask he stole. Link learns the Skull Kid has caused mischief across the new world he's entered called Termina, and that he is trying to get the Moon to crash into Clock Town and destroy the world at the end of Day 3. Link gets the Ocarina of Time back and uses the Song of Time to transport him and Tatl back to the beginning of Day 1. The Happy Mask Salesman turns Link back to a Hylian, leaving a mask behind that will allow him to turn back to the Deku Scrub whenever he wants. Link now must awaken the 4 Giants in the 4 compass directions to prevent the Moon from falling, and must repeat the same 3 days over and over until he can awaken them. After saving the Deku Princess and removing the poison from the Southern Swamp, bringing Snowpeak Mountain to spring, saving the Zora eggs and clearing the fog from Great Bay, and bringing peace to souls in Ikana Canyon. Link stops the Moon from crashing into Termina, but the mask the Skull Kid was wearing, called Majora's Mask and harnessing dark evil powers, takes over the Moon itself. Link lands on the moon through the portal left from majora's mask dark powers, and defeats Majora in his Mask, Wrath, and Incarnate forms. Link then leaves to return to Hyrule and continue his search for Navi.

Link is the hero and main protagonist of The Legend of Zelda: The Wind Waker and starts his adventure on Outset Island. Link's sister, Arryl, is kidnapped by the Helmaroc King after it drops Tetra in the island's forest. Link rides along with Tetra and the pirates on their pirate ship until he is shot at the Helmaroc King's stronghold, Forsaken Fortress. Link is knocked away, but is saved by a talking boat called The King of Red Lions, who offers to help Link save his sister. After getting the 3 Goddesses Pearls, Link goes underwater to a submerged Hyrule Castle. He pulls the Master Sword out, and goes back to confront the Helmaroc King. He defeats it and frees his sister, but learns the true evil is a man named Ganondorf, who was stopped by the Hero of Time in the past, but came back and caused the Great Flood that formed the Great Sea. The Master Sword, which was supposed to be able to defeat Ganondorf, has lost its power and Link is saved before he can be killed. Tetra is revealed to be Princess Zelda in disguise, and Link awakens the Earth and Wind Sages, who restore the Master Sword's power. Link recovers the broken-up Triforce of Courage and confronts Ganondorf again, this time with Zelda. Link and Zelda defeat Ganondorf, who is impaled through the forehead by the Master Sword and is turned to stone and dropped down to the bottom of the Great Sea. Link and Zelda, now back as Tetra, go in search of a new Hyrule. 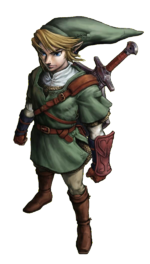 Link is the hero and main protagonist of The Legend of Zelda: Twilight Princess, starting off as a rancher who lives in Ordon Village. He is dressed with a multi-colored shirt and pants, and sandals. He buys a slingshot and shows it off to the kids when a monkey comes and Malo, Talo, and Beth run after the monkey. Talo keeps running after the monkey, while Malo and Beth get left behind. Link has to find Talo and the monkey. After he saves Talo and the monkey he returns to Ordon Village. The next day he prepares to go off for Hyrule Castle to deliver a gift but Ilia notices a cut on Epona and yells at him. When Link goes to apologize Twilight covers the land and Link has to return the Tears of Light to the Light Spirits, and go through three dungeons to get three Fused Shadows. He then has to repair the Mirror of Twilight. Once he does, he has acces to the Twilight Realm. He is there to defeat Zant. After he does that, he goes to Hyrule Castle and confronts Ganondorf.

Link is the hero and main protagonist of [[The Legend of Zelda: Skyward Sword|The Legend of Zelda: Skyward Sword, starting off the game as a young man living in Skyloft, who attends a Knight Academy. Link is dressed with boots, green pants and a sweatshirt, not unlike the rest of the citizens of Skyloft. He is a very active young lad who goes skydiving and bird riding to impress Zelda and his other classmates. Each of the citizens of Skyloft have large birds called Loft Wings that they use for transportation, but Link has a rare red Loft Wing that he befriends early on. Link is very close friends with Zelda and they seem to care greatly for each other. Early on in his quest, Link successfully wins a bird race conducted by the Ceremony Leader and this allows him to win a prize from Zelda.

While Link and Zelda are riding off through the clouds, a sudden tornado is summoned, causing Zelda to fall off her bird and get sucked down into the land below. Link goes after Zelda, but appears to be knocked out cold by the huge fall. He is awakened by Fi, the spirit of the Goddess Sword, who then sticks with Link throughout his quest, serving as his spiritual guide. Link also comes across an old man known as Gaepora who is living in Skyloft and is Zelda's father.He entrusts him with his signature green tunic.

Link travels down to the land below in search of Zelda. Throughout his quest, he uses a standard set of inventory items that he upgrades along the way as he battles through the overworld and dungeons, attempting to save Hyrule from the evil that lurks there. Part of his quest takes him to the Silent Realm, where he must collect Tears of Light and avoid guardians without the aid of his sword. He fights many foes along the way, but perhaps none fiercer than the Demon Lord Ghirahim. Ghirahim is also in search of Zelda and has no problem bringing Link within an inch of his life. It's up to our hero to defeat Ghirahim, rescue Zelda, and save the lands of Skyloft and Hyrule. 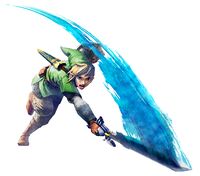