The Light Force is a gift from the Picori said to hold immense power. It is a power found in all living organisms. The Light Force was entrusted to the Royal Family of Hyrule after the conclusion of the War of the Bound Chest. This golden relic was pivotal in enabling the Hero of Men to drive away the evil that invaded Hyrule. 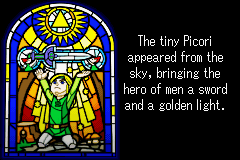 The first mention of the Light Force in the introduction to The Minish Cap.

Legend states that after the end of the Era of Prosperity, the Hero of Men appeared to fight the forces of evil.[1][2] The Picori then descended from the heavens gifting him with the Picori Blade and the Light Force.[3] The Hero of Men used these gifts to destroy the monsters plaguing the land sealing them within the Bound Chest. The Light Force was then sealed with Princess Zelda's body.[4]

During the events of The Minish Cap, the contents of the Bound Chest are released by the sorcerer Vaati who incorrectly assumes it be the resting place of the Light Force.[5] Realizing Zelda's body contains the Light Force, he turns her to stone and takes over Hyrule Castle impersonating Daltus, the King of Hyrule.[6]

Towards the end of the game, Vaati nearly extracts the Light Force from Zelda but is stopped by Link.