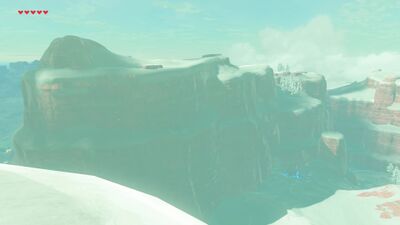 The Laparoh Mesa is a location in Breath of the Wild.

The Laparoh Mesa is a snowy and flat area at the east side of the Gerudo Highlands. As with much of the region, the area is bitterly cold, requiring Link to wear armor with Cold Resistance, such as the Snowquill Set, in order to survive.

At the northwest part of the mesa, a dangerous Blue-Maned Lynel can be found. There is a wind geyser located just to the northwest of the lynel and can be used regularly to get perfect shots with Arrows. Once defeated, the Lynel will drop a Mighty Lynel Crusher and a Savage Lynel Bow. Near the Lynel, there is a buried treasure that contains a Royal Shield.

At the south end of the Mesa, there are some rocks on the floor and when Link walks over it, a Frost Talus will appear. Link can shoot the Frost Talus with a Fire Arrow, causing its body to thaw out and allowing Link to climb on top of it.

On the higher snow ledge at the east side of the mesa, there is a large ice block. Link can melt it to find a Korok Seed. Another Korok can be found just northeast of the Mesa, way down at a lower elevation at the top of a tree.

Northwest of the Mesa, there is a bridge that connects the lower part of the mesa with the Gerudo Summit. A treasure chest can be found buried here with a Royal Bow. On the western wall there is a Korok block puzzle.

Melt the large chunk of ice.

Melt the large chunk of ice.

Melt the chunk of ice that's closest to the edge.

Melt the chunk of ice that's closest to the edge.

Climb the tree and examine the fairy lights.

Climb the tree to find a hidden Korok.