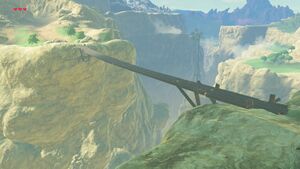 The Kolami Bridge is a location found in Breath of the Wild.

The Kolami Bridge can be found along the path that leads northward towards the Rito Stable and Rito Village. The bridge is made up of longer timber woods that are strung together, extending over a fairly long distance. The bridge is fairly narrow with no railings on the side, but appears to be stable, despite its fragile look. The Strock Lake can be found to the west, with the Tanagar Canyon located to the east.

Beneath the bridge there are numerous Blue Lizalfos, as well as some Keese that occasionally appear. Some Maraudo Wolves can be found in the area as well. Some Luminous Stone Deposits can be found on the side of the cliffs, where there is also a Rugged Rhino Beetle attached to one of them.

Under a rock behind some destructible boulders.