Rhoam Bosphoramus Hyrule is a character from Breath of the Wild. He is the "Last King of Hyrule" and the father of Princess Zelda.

A century ago, King Rhoam, aided by the four Champions and the Divine Beasts, attempted to stop Calamity Ganon from destroying the world. Ganon was cunning, however, and created the various blight Ganons to take control of the Divine Beasts and turn the Guardians against the people of Hyrule. On that day most of Hyrule's citizens, including the Champions and the King himself, lost their lives.[1][2][3] Princess Zelda managed to survive and seal Ganon away inside Hyrule Castle.[4]

For the past century, Rhoam has wandered the land as a spirit, concealing himself as an Old Man.[5] Other than the Monks and Link, the Old Man is the Great Plateau's only resident.

A hundred years after these events, Princess Zelda's power began to wane and Ganon was breaking free from his prison. Rhoam encountered Link when he emerged from the Shrine of Resurrection, serving as his guide in the new world. Once Link completes the first four shrines, Rhoam reveals his identity to Link. He will tell Link of the events that caused his demise and pleads with him that he must save his daughter and destroy Ganon.[6]

As Ganon still has control over the Guardians that surround Hyrule Castle, Rhoam advises Link to head east towards Kakariko Village and seek out Impa.[7]

King Rhoam will then give the Paraglider to Link before vanishing.[8] This will give Link two Main Quest objectives, including Destroy Ganon and Seek Out Impa.

Following Calamity Ganon's defeat, Rhoam sees his daughter again before he and the other deceased champions depart. 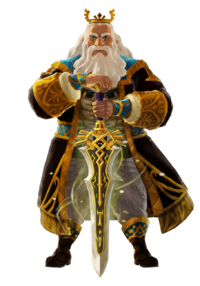