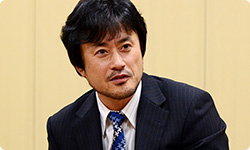 Kazuaki Morita is a game developer who has worked for SRD since the Nintendo Entertainment System and Arcade days. He first worked on both the Arcade and NES versions of Ice Climber and Super Mario Bros., before then moving on to work as a programmer on The Legend of Zelda. He has since worked on almost every single major title in the Legend of Zelda series, working primarily as a programmer.