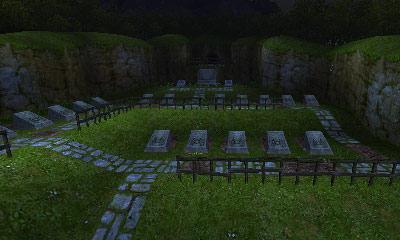 The Kakariko Village Graveyard is a location that appears in Ocarina of Time. It is a graveyard that is found to the east of Kakariko Village. Dampé is the gravekeeper there.

The area is naturally filled with many tombstones that can be pulled back to reveal secrets. However, if Link tries to pull back the graves during the day while the Graveyard Boy is there, he scolds him and he is not allowed to move them.[2] Many of the graves containing secrets are marked by a small patch of flowers at their base.

Dampé lives in the southwestern corner of the graveyard in his hut. While Link is a child, he remains shut inside his home during the day, sleeping.[3] However, he leaves his house and patrols the graveyard at night and offers the Heart-Pounding Gravedigging Tour. After Link becomes an adult, he can enter Dampé's house and finds his diary there.[4] Dampè writes that anyone who reads it should come find him in his grave to obtain a special item.[5]

Dampé's Grave can only be entered while Link is an adult. It is found in the north of the graveyard and marked by flowers. Beneath it, Link finds Dampé's ghost, who challenges him to race him to the end of the tomb. When Link succeeds, Dampé offers him the Hookshot.[6] Later, he is given a Piece of Heart if he does the race a second time in less than a minute.

The Royal Family's Tomb is situated at the very back of the graveyard and marked by a large tombstone with the crest of the Royal Family of Hyrule.[7] Link can enter inside it by playing Zelda's Lullaby and learn the Sun's Song.

The graveyard leads to the Shadow Temple, which is only accessible by playing the Nocturne of Shadow to reach the Triforce Pedestal just outside the temple. In order to reach the interior of the temple, Link needs Din's Fire to light the torches to open the entrance to the temple. The Gossip Stone next to the Triforce Pedestal refers to the secret grotto next to the tree that is just outside Kakariko Village that contains a Gold Skulltula.[8]

One of the graves in the east of the graveyard hides a grotto that is revealed when the headstone is pulled back. Inside it is a treasure chest with a Piece of Heart. However, it is only revealed after playing the Sun's Song.

A Fairy Fountain is hidden under one of the graves marked by flowers. Inside is a grotto with a treasure chest containing a Hylian Shield and the passage to the fountain.

The Heart-Pounding Gravedigging Tour is a mini-game found in the graveyard between 18:00 and 21:00 in Hyrule Time as a child.[9] Link can win a variety of prizes from this game, including a Piece of Heart.

Dampé the gravekeeper, of course, lives in the graveyard. By the time Link becomes an adult, Dampé has died and is buried in a grave on the western side of the area. He challenges Link to a race if the hero visits his ghost down there.

The Graveyard Boy spends the entire day here as well during the child timeline, pretending to be Dampé.[10] Link can sell him the Spooky Mask for 30 Rupees.[11] He threatens Link to tell Dampé whenever he tries to move one of the graves.[2] The Composer Brothers, Flat and Sharp, are also buried here. They are provoked and attack when Link reads their respective graves, but speak to him about their life studies when defeated.

Poes are the most common enemy found in the Graveyard. If Link pulls a grave that does not reveal a hidden grotto, a Poe will appear. There are also ReDeads in various locations in the Graveyard. Some appear beneath Dampé's grave, one in the grotto with a Piece of Heart, and there are many in the Royal Family's Tomb. Keese can also be found in the Royal Family's Tomb.

The Hookshot is obtained for finishing the race with Dampé. Four Pieces of Heart can be obtained in the Graveyard: one from the crate reached with either the Longshot or a Magic Bean plant, one from playing the Sun's Song in the grotto with a single ReDead, one from Dampé's Heart-Pounding Gravedigging Tour, and one from beating Dampé's race in under sixty seconds. A Hylian Shield can be found in the grotto with a Fairy Fountain.