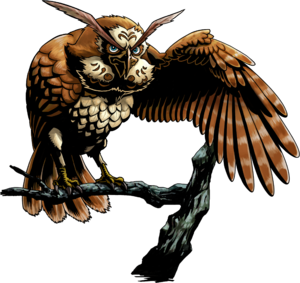 Kaepora Gaebora is a recurring character in The Legend of Zelda series. He is the reincarnation of the ancient Sage Rauru.[1][2] His name is also very similar to the Skyward Sword character, Gaepora. Kaepora Gaebora usually gives advice to Link throughout the games that he is in.

Ocarina of Time is the first appearance of Kaepora Gaebora. He first appears after Link leaves the Kokiri Forest, at the entrance to Hyrule Field. In this game, some people find him quite annoying because he can trick Link into letting him repeat whatever he said. It is obligatory that Link talks to him a minimum of five times. It is also optional to talk to him another two times in which he offers a ride, one of which leads to a Piece of Heart. He can also be seen another time flying over Lon Lon Ranch.

In Majora's Mask, unlike Ocarina of Time, Kaepora Gaebora doesn't give rides to Link, but he does teach him the Song of Soaring and leads him to the Lens of Truth. The Owl Statues in Termina look very similar to Kaepora Gaebora himself. Note that in the game he appears to be a "higher being" instead of just a talking owl. For example, he seems to remember Link even after the Song of Time has been played. Also, in Majora's Mask, he is just referred to as 'The Great Owl'.

Throughout Four Swords Adventures, Kaepora Gaebora can be found at the start of various levels and occasionally at other moments as well. His advice is rarely useful due to the game's linearity, but it does add to the story and let Link know what they are doing. For example, at the end of the Tower of Flames, the owl gives advice telling Link to go towards Hyrule Castle because a dark force has covered it in monsters. He gives no control advice, but adds to the atmosphere of the game. In this game, he does not ask Link if they want to hear what he said again.