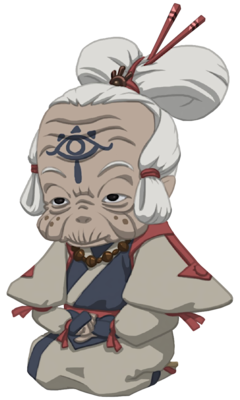 Artwork of Impa from Breath of the Wild

In Oracle of Ages and Oracle of Seasons, Impa is the Royal Nurse for Princess Zelda and has cared for her since her birth..[2]

After reverting to her normal self, she thanks Link for saving her. After seeing the symbol of the Triforce on Link's left hand, she tells Link that he is the hero that must save this world. She will give you the Wooden Sword, which was entrusted to her by Princess Zelda. Impa will then take refuge in Nayru's house for much of the game.

Once Link has recovered one of the memories found in the Sheikah Slate, Impa will gift Link the Champion's Tunic; the very same Link wore 100 years ago. Later, after Link has recovered 17 of his memories, Impa will show Link a painting of a specific location, and explains that it portrays the area where Link will restore the final memory.