This article is about the ninth dungeon in A Link to the Past. For the dungeon from A Link Between Worlds, see Ice Ruins.

The Ice Palace is the fifth Dark World Dungeon and ninth overall in A Link to the Past. It is the first ice dungeon in franchise history. Link must use the Titan's Mitt to lift an impeding boulder in the Pond of Happiness in Lake Hylia in the Light World to reveal a portal to the Dark World leading to the dungeon. The Fire Rod from Skull Woods is required for progression down the dungeon. 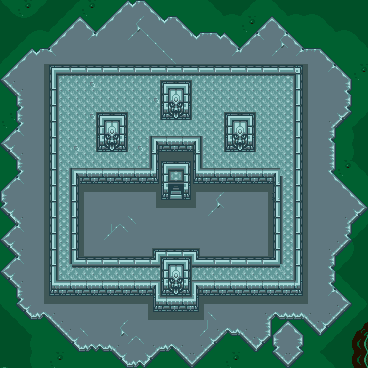 The vast majority of this dungeon is underground, with only one floor above ground and seven floors below ground. This makes the Ice Palace the second deepest dungeon in the entire series, second only to the Temple of the Ocean King from Phantom Hourglass. Since the main theme of this dungeon is ice, the Fire Rod is especially useful in defeating enemies. The item found within this dungeon is the Blue Mail. Its boss, Kholdstare, resides on basement seven, the deepest floor in the dungeon. After defeating Kholdstare, Link is awarded a Heart Container and the Fifth Crystal.

"Dark World Entrance"
"The only way to reach the Ice Palace was through a Warp Tile in the Light World. This magical entrance to the Dark World was located under a very heavy rock at the entrance to the Pond of Happiness."

"Since the Ice Palace was a very cold place and population by creatures who were created by the magic of ice and snow, it only makes sense that a warm weapon would be quite useful. Those explorers who had command of the Fire Rod found this device to be very useful in the chambers of the Ice Palace. A supply of Potion was also good to have as the enemies were very strong and in large abundance. The villain, Kholdstare lurked deep in the palace dungeons."

"A Break in the Ice"
"The Ice Palace was carved out of a huge Iceberg. So, it was not uncommon for some of its passages to melt away. A Hookshot was a very important item to have in cases where the flooring had dissolved and nothing was left but a bottomless pit."

"It is said that 90% of an iceberg is underwater. This was true in the case of the Ice Palace, as most of its chambers were well below the water line."

"The Ice Palace was built where a Faerie once granted wishes, in the Pond of Happiness."

"Some Ice Palace creatures could only be defeated by the powerful Fire Rod."

"Cold Corridors"
"The chambers of the Ice Palace proved to be quite a maze. Adventurers were particularly perplexed by a switch in the floor of one of the lower chambers which would only keep a door open when constant pressure was applied. "

These are enemies you can expect to encounter: