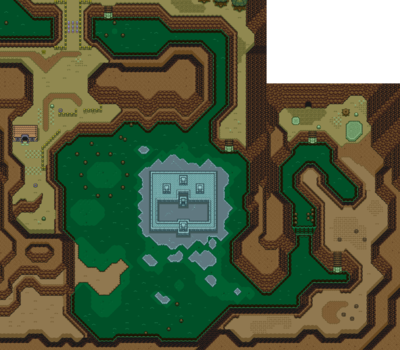 "Adventures in the Ice and Snow"
"Ganon exercised his chilling powers by causing the lake in the southeast to freeze and by creating a storm cloud to cover the area with snow. It served adventurers of this region well to wear gear that would protect them from the elements."

"The creatures who survived the sudden change of weather were said to be very tough. Zirros and Pikits ruled on the land and a band of Zora's Spawn took over the cold waters of the lake. The subjects of the Golden Land who survived stayed in caves and buildings."

A Link to the Past Locations[edit][hide][show]
Retrieved from "https://www.zeldadungeon.net/wiki/index.php?title=Ice_Lake&oldid=292964"
Category:
Hidden category: