Difference between revisions of "Hyrule"

TODO: Rewrite, expand
Care to do so?
Hyrule 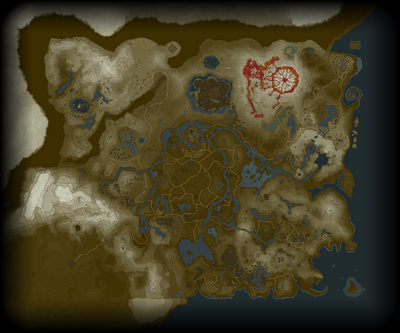 Map of Hyrule from Breath of the Wild

Hyrule in Ocarina of Time is very different from the previous three. Hyrule Castle and Hyrule Castle Town are both located in the north. Hyrule Field and Lon Lon Ranch are located in the center. Death Mountain, Zora's Domain, Kokiri Forest, and the six dungeons are all located in the east side of Hyrule. The south part of Hyrule is Lake Hylia as well as the Water Temple. The west side of Hyrule is the Gerudo Desert, along with the Spirit Temple. With Link's horse companion, Epona, he can travel around Hyrule faster. Hyrule has many visual differences between when Link is a child and when he is an adult. When Link is a child, Hyrule is bright, the Market and Kakariko Village are full of people and open shops. Seven years later, the market is deserted with nothing left but ReDeads and all shops have been moved to Kakariko Village. Death Mountain has a large fiery cloud around it when Link is an adult. This is different than the normal cloud around the mountain when Link is a child.

Hyrule in Twilight Princess is divided into four main provinces. Ordona Province and Faron Province are located in the south. Lanayru Province is located in the center of the whole kingdom and Castle Town and Hyrule Castle are both located there.

Hyrule in Breath of the Wild is in ruin after the Great Calamity put it to destruction. It is divided into 15 regions, which all have towers that you can activate to fill your map. These regions include: Akkala, Eldin, Gerudo Wasteland, Hateno, Lanayru, Central Hyrule, Faron, Great Hyrule Forest, Hebra, Ridgeland, Dueling Peaks, Gerudo Highlands, Great Plateau, Lake, and Tabantha. It is filled with monsters as an effect of the Great Calamity, and has many ruins that were victims of the Great Calamity. It also has many towns that survived the Great Calamity, including Hateno Village, Kakariko Village, etc.