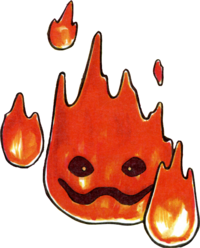 Hot Head is the Nightmare of Turtle Rock, the eighth Dungeon in Link's Awakening. Mainly, he appears to be a tuft of fire with a face, similar to a Podoboo. After Link hits him enough times, though, he sheds his fire and becomes a big-eyed head with fangs.

Hot Head is found in a room at the north of the dungeon. The area is filled with lava, aside from the small space of secure land along the south and east walls, in addition to a short platform at the north in front of the exit. Upon entering, Hot Head taunts Link, saying that he can never let the hero awaken the Wind Fish, and then he attacks.[1] The strategy to defeat Hot Head is straightforward: Link must fire the Magic Rod at him whenever he pops out of a lava pit. Hot Head will jump out of the lava multiple times, and every time he jumps back in a large splash will cause four fireballs to go flying around the room that may harm Link. Near the end of the battle, his fiery exterior dissipates and he turns into a mask-like figure.

Once Hot Head takes his final hit, he laments his loss and complains that if Link had never arrived on Koholint Island, nothing would have ever changed.[2] He dies, leaving behind a Heart Container and opening the door into the next room. In there, Link can find the Thunder Drum, the final Instrument.