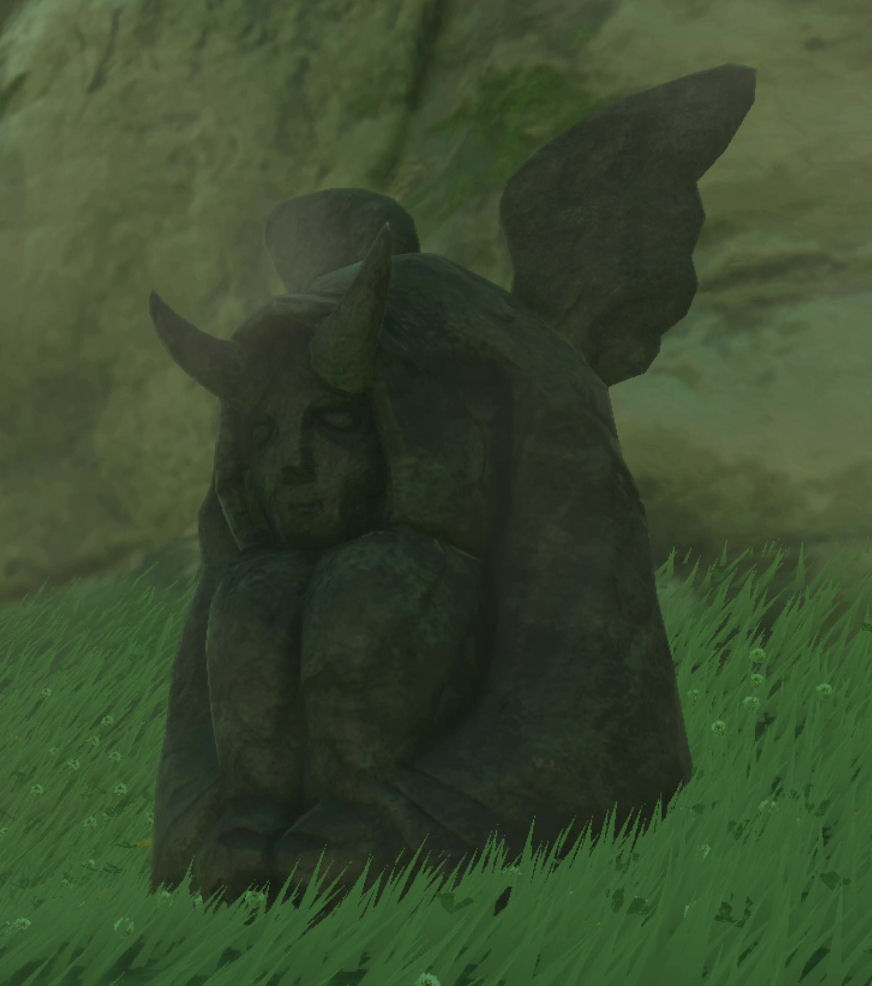 The Horned Statue appears in Breath of the Wild within Hateno Village. It is similar in appearance to the small Goddess Statues, but is black in color, has horns, and appears to be wearing a cloak.

The statue is located near Firly Pond in close proximity to Link's House at the southwest portion of Hateno Village. This statue is used for converting Hearts into Stamina and vice versa. When Link wants to convert his 'essence' into a different container, the Horned Statue will pay 100 Rupees for giving the essence, but in order to receive a new essence, Link will have to pay 120 Rupees. In total, it costs 20 rupees to change essences.

Link can find a small child by the name of Teebo who is playing around near the west end of Hateno Village. When Link talks to him, Teebo mentions that he found something neat and he will lead Link to the statue.[1][2][3] Teebo is surprised when he finds that Link is able to talk to the Horned Statue, calling Link a weirdo.[4]

When Link talks to the statue, it will unlock a side quest called The Statue's Bargain. The Horned Statue mentioned that its life-for-money bargains did not sit well with the Goddess Hylia, so he was trapped inside of this statue a long time ago. The statue is neglected in town, with the villagers not even taking the time to clean it off from bird droppings. Despite this, the Horned Statue has waited patiently for somebody like Link to come around so that he can strike a bargain.[5]

The Horned Statue will take one of Link's "essences" away.[6] If he speaks to the Horned Statue again, Link can ask for the essence back.[7] The statue will allow him to choose either a Heart Container or Stamina Vessel.[8]

The first time Link exchanges for a different essence, there will be no cost. Once Link has completed the first exchange, this will complete The Statue's Bargain side quest.[9]

The complete amount of vessels awarded to Link is 34, which can be distributed between Heart Containers and Stamina Vessels. Only one of those two totals can be maxed out upon completion, as 37 spaces are available (24-27 heart containers OR 7-10 stamina Vessels), plus an additional space awarded by playing The Champions' Ballad. This does not affect the prices of containers that the Horned Statue handles, which are priced as such:

As such, since Link interacts with the Statue at a loss, it's important to have enough Rupees for the exchange, especially when dealing with a large quantity of hearts. Given the circumstance that Link ends up being short on Rupees, East Wind and the Ventest Clothing Boutique are the closest stores where materials can be sold.