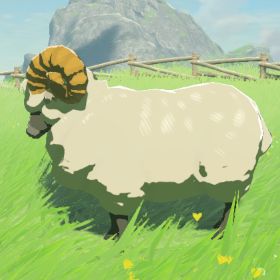 "Originally native to the mountainous regions, these sheep were domesticated for their wool and have since found a home in villages. Once the fluffy wool grows out, it's harvested and used to make clothing and bedding. They're calm, timid creatures and move about in small herds."

A Highland Sheep is an animal found in Breath of the Wild. They can be found in farms by Stables and towns such as Hateno Village.

Like most domesticated animals in the game, it cannot be killed.