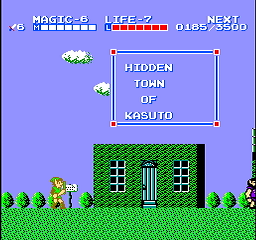 The Hidden Town of Kasuto, also known as New Kasuto is a location from The Adventure of Link. It was formed after the destruction of the original town of Kasuto by the forces of Ganon.[1] Hidden Kasuto contains a number of treasures including a Magic Container, the Magical Key, and the Spell Spell.

Link receives new clues regarding the mysterious Three Eye Rock[2] and the nature of a pit in the Three-Eye Rock Palace.[3]. Scrawled on a wall, in an empty house hints at something to be found on the Seashore east of Three Eye Rock.[4]. After gaining access to the final Magic Container, an old woman will also inform Link that a secret is to be found at the edge of the town.[5] Another villager informs Link that someone remains in the ruins of the old Kasuto.[6]

Link encounters the Magic Container Lady outside one of Hidden Kasuto's houses. If he has already found the other three Magic Containers hidden throughout Hyrule, she will allow him inside the house where the fourth and final Magic Container awaits in the basement.

When Link acquires the fourth Magic Container, a woman inside the house where it is found hints that all is not as it seems at the edge of town. After learning the Spell Spell, Link can cast it in the empty field at the far end of Kasuto and uncover an underground vault, within which he will find the Magic Key.

One of Kasuto's houses at first appears as many of the others occupied by Wise Men in other towns, but no entrance to the basement is immediately apparent. Upon inspecting the conspicuous fireplace, Link realizes that he can climb inside.[7] In the basement, the Wise Man will teach him the spell assuming Link has at least seven magic containers. If not, he will be sent away[8]