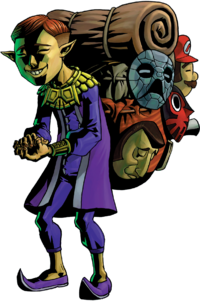 The Happy Mask Salesman is a recurring character in The Legend of Zelda series. He travels across Hyrule and Termina collecting and selling masks. Some of his masks are very rare and powerful. Many of them can transform Link, and the most famous, the spirit-possessed Majora's Mask, can give anyone who wears it unbelievable power. The Mask Salesman's real name is unknown, and much of him is a total mystery. He has a very unpredictable personality, and will go from happy to extremely angry in seconds. He also seems to be able to do some magic, as is shown in Majora's Mask when he makes an organ appear, then plays the magical Song of Healing.

The Happy Mask Salesman first appears in Ocarina of Time, where he runs a simple mask shop in Castle Town. He asks Link to go out and sell his masks, and for every mask he sells he can get a new mask. This is an optional side quest called the Happy Mask Side Quest. If Link sells all four of the masks that the salesman wanted him too, Link gets to take the Mask of Truth, which allows him to read Gossip Stones.

The Mask Salesman is never seen outside his shop in this game, and it is unknown where he goes after the seven years when Ganondorf takes over. However, he does appear at the party at Lon Lon Ranch at the end of the game.

The Happy Mask Salesman is a much more important character that plays a bigger role in Majora's Mask. Link first encounters him in the Clock Tower, where he tells Link about how the Skull Kid took his mask, and asks him to get it back. He also says that if Link can get his Ocarina back, he can teach him a song that will turn him back into his normal form (Link was currently in the form of Deku Link). Apparently, he only has three days to stay in Clock Town, so he needs Link to retrieve it before then.

Link retrieves his Ocarina during the night of the final day, but fails to get the Mask. The Mask Salesman teaches him the Song of Healing, but after learning Link failed to obtain the mask, he becomes very angry, and starts shaking Link violently. He then reveals the story of the mask, telling about its true power, and how getting it back is crucial to the survival of Termina.

When the Moon crashes into Termina, and the game is over, you hear the chuckle of the mask salesman, and the words:

"You have met with a terrible fate, haven't you?"

The Happy Mask Salesman can be found in his shop, located on the outskirts of Lynna City just west of the present-day Nuun Highlands. Link learns that the Salesman is extremely hungry, and asks if Link will give him something to eat.[1]

As part of the Trading Sequence, Link will obtain the Tasty Meat from the Tokay cook on Crescent Island. In exchange for the Tasty Meat, the Happy Mask Salesman will give Link the Doggie Mask, which will later be traded to Mamamu Yan.