Difference between revisions of "Groose" 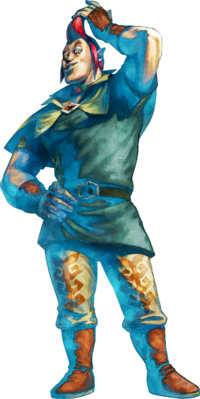 Groose is a major character that appears in Skyward Sword.

Groose appears throughout the game in different ways. He has a thing for Zelda and is determined to win the bird-riding competition to impress her. He and his lackeys compete very roughly with Link, and try to knock him around to prevent him from taking the bird statue first. His actions derive from jealously towards Link knowing that Zelda wants Link to win since they are childhood friends. He also has his lackeys, Cawlin and Strich, throw eggs at Link to slow him down. Instructor Owlan specifically warned against this behavior just before the contest began, and Gaepora singled out Groose as someone who is prone to not play by the rules. A little while through the game, when Link enters Faron Woods, as he is landing with his Sailcloth, Groose yells from above and falls onto Link, causing them both to crash to the ground. He begins to insult Link on his landing abilities, but cuts off when he realizes the completely different world where he is (mostly a land full of small non-ride-able birds and Gorko). Groose confesses that he had noticed Link quickly entering and leaving town, and decided to follow him to see what he had been up to, so Link explains where he is and what happened. After what seems like a long discussion, Groose realizes that the tales of the nothingness beyond the clouds that he grew up with were lies, and that Zelda is somewhere in the new, vast world, safe and sound. He names the world "Grooseland", and then tells Link that his journey is over and that he'll take over on saving Zelda from now on. This changes quickly, however, when Link goes to the Sealed Grounds and must reseal The Imprisoned again. Groose considers himself useless, and pounds his fists into the wall in despair. From this point on, Groose realizes Link's full potential and responsibility, and acts to him as a sort of buddy, not rival. The next time Link returns to the Sealed Grounds, Groose has built a track-and-catapult like thing that he calls the Groosenator. It proves more useful and creative than its name, helping to temporarily stun The Imprisoned when he grows arms and starts climbing up walls, and also when he begins to float towards the Temple of Time. Groose grows fond of the old woman living in the Temple of Time, and refers to her as "Grannie".

At the end of the game, when Impa, now revealed as the old woman (Grannie) disappears, Groose shows extreme sadness and despair. This is the complete opposite of his character in the beginning of the game, where he cares only about himself.