The Great Palace, also known as Thunderbird Palace, is the final and most difficult dungeon in The Adventure of Link. This temple holds the Triforce of Courage and waits for a hero with a pure heart, worthy of the power it gives.[1] In order to protect the Triforce, the King of Hyrule constructed the palace at the end of the Valley of Death and sealed it with a magical barrier called the Binding Force. The seal can only be undone when the six Crystals gathered from the temples are placed in the stone statues.[2] 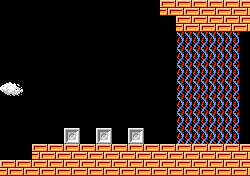 Unique, bird-like enemies like Fokka and Fokkeru defend this gigantic palace along with more powerful incarnations of other monsters Link has encountered in other palaces.

At the end of the Great Palace, Link is attacked Thunderbird, a fearsome blue winged creature that spews fire from its mouth. In the final confrontation, the Sage summons Link's own shadow. Upon defeating him, Link can complete the Triforce and awaken Princess Zelda.[3]

Unlike in other dungeons, if Link is defeated, he appears at the entrance of the Great Palace instead of the North Castle when choosing continue after running out of lives.[4]