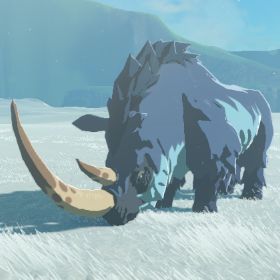 "This animal's horn is a whopping half the size of its body. Although originally members of arid-region rhinoceroses, these migrated to colder climates and adapted to live in snowy mountains. Their hides are particularly thick, and their horns can cause some serious damage, so only experienced hunters should track these."

A Great-Horned Rhinoceros is an animal found in Breath of the Wild. They can be found deep in the mountains of Hebra, and tend to run when confronted. Upon death, they may drop some pieces of Raw Prime Meat and Raw Gourmet Meat.

These creatures are among the ungulates in the game that cannot be ridden, alongside the Tabantha Moose, both being the two biggest animals available in the game.

The Great-Horned Rhinoceros resembles the real-life Wooly rhinoceros and the Elasmostherium, both extinct species of rhinos, being the only animal in the game that is based on a non-extant species.