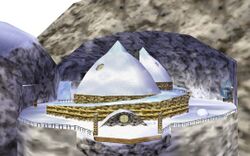 Goron Village is the location in Majora's Mask located in the Snowhead Region. It is the location of the Goron Tribe, who live here in the Goron Shrine. The Powder Keg Goron is also found here, as well as the Lens of Truth and The Business Scrub.

The Goron Shrine is located in the center of Goron Village; Entrance is dependent on obtaining the Goron Mask first, so in order to enter one must have obtained the Lens of Truth and found Darmani's Ghost.

To the East of Goron Village there is a large void with an apparent "floating cave" on the other end. Link must talk to Kaepora Gaebora and he will instruct you to "let your feelings guide you, and the true path shall open before you", which means to jump where Kaepora's fether land, simply put. Once inside the cave, a chest appears, in additon to a few invisible Skulltulas.

A cave to the north requires the Goron Mask as well since link cannot walk up it. It is also only avalible upon completion of the Snowhead Temple. Here Link can obtain the Powder Keg to open up the Goron Racetrack afterwards he then has the ability to carry these bombs, as well as, be able to purchase them from the Clock Town Bomb Shop.

Goron Village is located in the Fire Realm in New Hyrule. The most important Gorons in Goron Village are the Goron Elder and Kagoron, the Mountain Godess' Messenger. The first time that Link visits Goron Village, fire is blocking the way into the village. To make the path clear and enter the Fire Sanctuary, Link must meet Kagoron at the Altar of the Mountain Godess. Kagoron gives Link the freight car, so he can retrieve Mega Ice from Wellspring Station and cool off the lava, so that the Gorons can enter their village again. Link then speaks with the Goron Elder, who grants him passage to the Fire Sanctuary so he can meet with the Lokomo of the Fire Realm, Embrose.