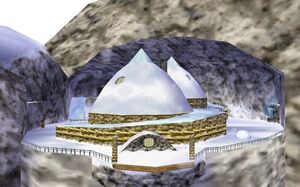 The Goron Village is a location in Majora's Mask located in the Snowhead Region. It is the location of the Goron Tribe, who live here in the Goron Shrine. The Powder Keg Goron is also found here, as well as the Lens of Truth and the Business Scrub.

To the East of Goron Village, there is a large void with an apparent "floating cave" on the other end. Link must talk to Kaepora Gaebora who instructs Link to let his feelings guide him, so the true path shall open before him, which means that Link should jump where Kaepora's feather lands. Once inside the cave, a Treasure Chest appears, in additon to a few invisible Skulltulas.

If Link has the Swamp Title Deed, he is then able to trade it for the Mountain Title Deed, which allows him to use the Deku Flower anytime as well as propel himself upward to the nearby Piece of Heart #23.