The Goron Temple is the fifth Dungeon in Phantom Hourglass. It is located on Goron Island in the Southeast Quadrant of the World of the Ocean King. 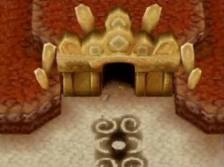 After Link acquires the Southeastern Sea Chart, he has multiple options, as he can venture to the Goron Temple or the Temple of Ice. Alternatively, Link can also acquire the Northeastern Sea Chart and head towards Mutoh's Temple. When Link tries to dock at Goron Island, he'll encounter a Massive Eye, an Overworld enemy that he must launch cannons at its eyes in order to defeat and gain access to the island.

While on Goron Island, Link is required to run around and speak with all the Gorons that he encounters. After doing so, he can speak with Biggoron and he can take the Goron Quiz. Successfully answering all 6 questions will result in Link gaining access to the north portion of the island. Biggoron's son, Gongoron, will run up ahead and after navigating the maze, Link will join him in the Goron Temple.

Early on in the temple, Link will encounter Armos and will need to use their massive bodies to push them onto floor switches, allowing Link to solve puzzles. The dungeon utilizes much of Link's inventory up until this point, with puzzles that require Link to use the Bombs, Bow, and Shovel. When Link arrives at the Basement, he will reunite with Gongoron, but they are separated by a barrier of sand. During this portion of the dungeon, Link and Gongoron will work together, where the player can alternate control of both characters. While playing as Gongoron, attacks are limited to simply jumping at enemies. Gongoron can roll around, picking up speed and being able to jump across gaps.

Working together with Gongorn, Link will acquire the dungeon item, the Bombchus. The second half of the dungeon heavily revolves around usage of the Bombchus, with Link needing to trace strategic pathways to launch Bombchus at enemies and floor switches. Often these are used alongside a Crystal Switch, where Link will need to raise and lower colored blocks in order to guide a Bombchu across a pathway. Bombchus can be sent throw small holes where Link otherwise would not be able to crawl through.

The boss features the same unique mechanic permeating most of the Goron Temple, switching between Link and Gongoron. Gongoron will need to avoid its charge and fire breath attacks. Gongoron can attack Dongorongo from its side, knocking it to the ground. Then controlling as Link, send a Bombchu across the sand to land in the mouth of Dongorongo. During this phase, Link must also be wary of the enemy Eye Slugs that will attack. As Gongoron attack the boss's side and then quickly switch control to Link. Trace a path for your Bombchu on the DS touchscreen towards the beast's mouth. Repeat the process three times.

After the initial phase, it appears as if Dongorongo is defeated and Gongoron will depart the boss chamber. However, after crossing the bridge, Dongorongo will be revived for the final phase of the battle. Link will need to launch bombs into Dongorongo when the beast is inhaling. Doing so will stun the boss, allowing Link to deliver some sword slashes.

Link will be awarded with a Heart Container and 2 more minutes of Sand of Hours. Link will also acquire the pure metal Crimsonine.