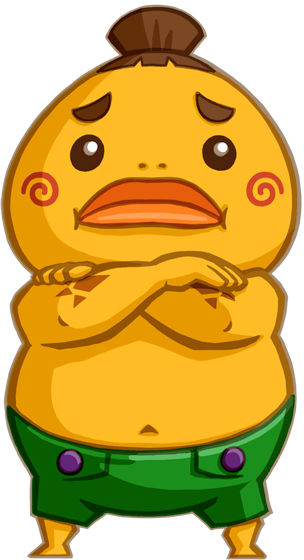 Artwork of Gongoron from Phantom Hourglass

Gongoron is the small Goron from Phantom Hourglass. He is the son of Biggoron, the chief of Goron Island. Originally, he is very rude to Link, refusing to assist him, and running and hiding from him multiple times. As such, Link must track him down. He is then spotted entering the Goron Temple alone. Link then goes in search of him within the temple, and rescues him after he is kidnapped by monsters. After this, he apologizes to Link, and helps him during the dungeon, where Link can control him. Gongoron can perform various moves, such as rolling and ground pounding. He also helps Link defeat Dongorongo, and obtain the Crimsonine.

Following successful completion of the temple, Gongoron returns home. He is later found on Dee Ess Island where he can be controlled by Link in a mini-game.[1][2][3]