Gleeok (The Legend of Zelda)

Gleeok is the fourth Boss in The Legend of Zelda. Gleeok is first encountered in Level 4: The Snake, where it is the guardian of the fourth Triforce fragment. Two dungeons later, in Level 6: The Dragon, Gleeok again appears, but this time as the Mini-Boss. Gleeok appears for the third and final time in Level 8: The Lion, as the boss. 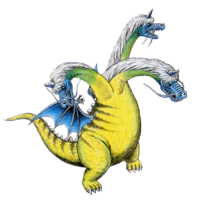 Gleeok first appears as the boss guarding the fourth Triforce fragment in Level 4: The Snake.[1] This variation of Gleeok has two heads. The only way to defeat Gleeok is to destroy each of its heads, in this case two. Link can use either use his Sword or the Magical Rod to destroy Gleeok's heads. Once one head is destroyed, it turns into a red, ghostly version of the head and then floats around the room to try to hurt Link.[2][3] Another caution for Link is that Gleeok's fireballs cannot be blocked by the Magical Shield. After Link has destroyed each head, Gleeok will be defeated and Link will have the opportunity to obtain the Triforce Shard.

Gleeok makes its second appearance in Level 6: The Dragon. This time, Gleeok is the mini-boss of the dungeon, not the boss. This battle is exactly the same as the previous one, the only difference being that this variation has three heads instead of two, making it slightly more difficult. After Link has defeated Gleeok, he can continue traveling through the dungeon. Alternatively, Link can use a Bomb to create a shortcut in the room south of this Gleeok and avoid fighting it entirely.

Gleeok makes its third and final appearance in Level 8: The Lion. This time, Gleeok is again the boss of the dungeon, and is also again guarding a Triforce Shard. This battle is much harder than the previous two, as now Gleeok has four heads that must be destroyed in order for Link to claim victory. After defeating Gleeok, the path to the final Triforce Shard opens up.

Gleeok's first appearance in the Second Quest is as the boss of Level 2. Just like in Level 4 of the First Quest, Gleeok is guarding the Triforce Shard and has two heads that must be destroyed in order to complete the dungeon. The only difference between these fights is that it takes place earlier in Link's journey during this quest, so he may not be as well-equipped to face the boss as he was in the First Quest.

A three-headed Gleeok appears at the end of Level 5 as well, guarding the fifth piece of the Triforce. Once again, Link will have to destroy all three of its heads in order to collect this Triforce Shard. Unlike during the First Quest, this three-headed Gleeok must be defeated to complete the dungeon.

Another two-headed Gleeok appears in this dungeon as a mini-boss, guarding the only underground passageway toward the main boss of the dungeon. Though Link must defeat this Gleeok to proceed through the dungeon, he should be more equipped than he was during Level 2, making this challenge easier. However, since Link must fight two more boss enemies in the rooms following this Gleeok, he may have to put a higher priority on defense than during Level 2.

Gleeok's final appearance in the game is as the boss of Level 7 in the Second Quest. Once again acting as the boss, this four-headed Gleeok must be defeated in order for the door to the next Triforce Shard to open up.