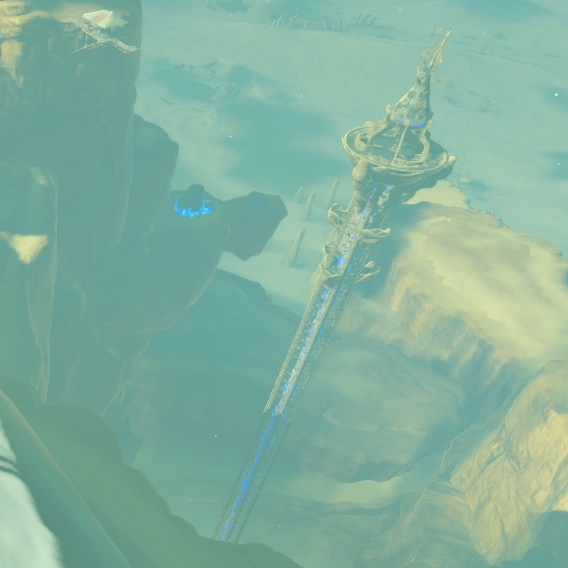 Gerudo Tower is a Sheikah Tower within Breath of the Wild. Located in the Gerudo Highlands, it is one of the four western Tower regions of the world right below the Tabantha Tower Region and north of the Wasteland Tower Region. It is also extremely tall, causing it to be the hardest tower in the game to scale.

The only 'settlement' within this region is the Gerudo Canyon Stable that it shares with the Wasteland Tower.

The tower's travel gate faces West, opposite the Birida Lookout.

The tower is the tallest Sheikah Tower in the game, and the one featuring the least parapets overall. Due to the fact that it's located in the middle of a bottomless pit, the tower is immeasurably tall, and due to this, it's one of the three towers in the game that can't be scaled from their bottoms (the other ones being the Wasteland Tower and the Woodland Tower, which are in the middle of swamps). The top of the tower can be reached by using Revali's Gale should the player have unlocked it, or by paragliding from the various high mountains surrounding it from the east, west and north.

Atop the tower, the player may find Kass, who triggers the Sign of the Shadow shrine quest to uncover Sasa Kai Shrine.

Breath of the Wild Sheikah Towers[edit][hide][show]
Retrieved from "https://www.zeldadungeon.net/wiki/index.php?title=Gerudo_Tower&oldid=432980"
Category: