Difference between revisions of "Ganon" 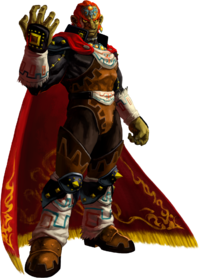 Artwork of Ganondorf from Ocarina of Time 3D

Ganon, also known as Ganondorf, is the main antagonist of The Legend of Zelda series. He has been present or at least referred to in the first five games of the series, and has subsequently been in three more after. Throughout the series, Ganon has had several deaths, both confirmed, like in The Legend of Zelda, and unconfirmed, as in Twilight Princess. Ganon possess the Triforce of Power, which contains the essence of the Goddess Din. This divine power makes Ganon unimaginably strong and grants him boundless power, making him the largest threat to Hyrule in all its history. As stated in the prophecy of Hyrule, the only one capable of defeating Ganon is the Hero chosen by the Goddesses.

Throughout the games, Ganon's intentions haven't changed. Taking the triforce of power or earning it and spreading darkness over Hyrule, And he often kidnaps Zelda in the process. Only his appearance has changed, He is blue and a pig-monster in LoZ while in OoT he is a gerudo and eventually turns into a giant, green monster. Ganon and Ganondorf aren't the same person, Ganondorf is the human/gerudo version while Ganon is the abomination, beast or demon version of Ganondorf. He is one of the few gerudo men born every 100 years and is king of the gerudos.

The prince of darkness has two "n"s in his name in the original Legend of Zelda. However, in most other games he is known as Ganon (one "n"). Ganondorf is his humanoid form.

Ganondorf has gone from a cold, heartless individual to a sad individual and back again. In older games he seems to be bent only on controlling Hyrule, but in Wind Waker players saw a different side of Ganondorf Dragmire, where he was yearning for Hyrule back. Mostly, though, he seems only bent on evil things.

In The Legend of Zelda, Ganondorf was only in his pig form, Ganon. He obtained the Triforce of Power and attempted to obtain the Triforce of Wisdom, but before he could, Link defeated him with the Silver Arrows. Ganon says nothing in this game

Ganon does not appear in Adventure of Link until you have lost all of your lives. He can only be revived by using Links Blood.

Ganon's shadow appears as one of the final nightmare's forms in Link's awakening. He can summon bats like in LttP and must be dashed into numerous times to defeat him.

Ocarina of Time is the first game in which Ganon's human form appears. Named Ganondorf, his picture is shown below. He came from the Gerudo supposedly swearing allegiance to the King of Hyrule. Of course he had other intentions. Ganondorf stormed Hyrule Castle forcing Zelda to flee. He then tried to take the Triforce for himself, but it split into three pieces leaving him with only the Triforce of Power, with which he could take over Hyrule but not completely fulfill his evil intentions. At the end of the game Link confronts Ganondorf defeating him, then defeating Ganon (Ganondorf's pig form). He was then banished to the Evil Realm.

Through a linked game, the player can go to a secret altar where they will fight Ganon. For the battle, Ganon will constantly be disappearing and reappearing. Sometimes he will appear and slash at you with his trident. He also has several variations on an orb attack: sometimes he will shoot three larger orbs, one large orb, or many smaller orbs. All his attacks including his trident slash can be avoided by jumping with the Roc's cape. Sometimes he also charges up for a jump which will stun you for a moment. Again, you can avoid this by jumping before he lands. To fight him, you must charge up a spin attack when he isn't on the screen. When he appears, move next to him and hit him with the spin attack. When he begins to become low on health, he will change the room briefly to a strange blue room and back again. When the blue room is in effect, controls are reversed (if you press left, you will go right, etc) so you have to be careful. After many spin attacks, Ganon will be defeated and you will have beaten the game.

As mentioned above in his characteristics, Ganon had a slightly different personality in Wind Waker. He first appears near the beginning of the game where ordered Link thrown into The Great Sea. He doesn't appear in person again until the end of the game when Link and him have a sword duel in drowning Hyrule at the end of the game, ending with him being turned to stone.

Considered by many to be a cameo appearance, Ganondorf didn't show up till the end of Twilight Princess. According to the Six Sages (although one of them was killed by him) he was imprisoned in the Twilight Realm. Ganondorf controlled Zant to do his bidding and then when Zant failed at his task, took matters into his own hands. He waited in Hyrule Castle for Link, then a long four-part battle ensued, with Ganondorf being killed in the end (unconfirmed).

Although Ganondorf does not make an appearance, he is mentioned in the prologue.

Ganon is not mentioned directly in this game, but is implied of his coming by Demise right before his death. Demise states that hatred for the gods and goddesses like his is so strong that it can never be vanquished for good, and a reincarnation of himself will be born into the world again someday.

Ganon appears in two anti-climatic boss battles where he states that you may not bring light to his lair and that you must join him and make your face the greatest in Koradai; or else you will die.