Frost Talus is a boss that appears in Breath of the Wild and Age of Calamity. 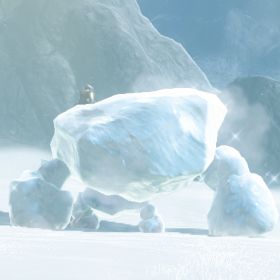 The Frost Talus is one of the many overworld bosses found in Breath of the Wild. It disguises itself in the ground as a collection of rocks, and the boss forms as Link draws near. This Talus makes its home in the cold regions of the game, including the Hebra Mountains and Gerudo Highlands.

There are 40 different Taluses spread throughout all of Hyrule. Along with the Frost Talus, Link can also encounter the Stone Talus and Igneo Talus, among others. Defeating all 40 and reporting to Kilton at the Fang and Bone rewards Link with the Medal of Honor: Talus.

The Talus beasts are scattered far and wide throughout Hyrule. Frigid, snowy regions are home to the Frost Talus variant, while the Eldin region features the Igneo Talus. Be sure to check out our Interactive Map for all the different locations the Frost Talus and its variants can be found.

Not all Frost Taluses are ice-clad upon being encountered, and their status may depend on weather, the time of day, and their location on the map. For instance, the Frost Talus which is southeast of the Gerudo Summit next to an archway may not always be frozen. However, most other Frost Taluses are always ice-clad, like the Talus of Coldsnap Hollow.

There is only one phase of this boss fight, so the strategy is very simple. Exposed on the top, or on the side, of all Talus beasts is an Ore Deposit of some variety, which is the only place the Talus can be damaged. The Talus is otherwise unaffected when attacked, except by Remote Bombs, which can be used to destroy its arms. The bombs can also be deal damage to the talus if the explosion directly hits the ore deposit, and also stunning it.

At Coldsnap Hollow Link will encounter a Frost Talus which is part of the Face the Frost Talus side quest given by Gesane at the first connecting bridge leading to Rito Village. Slaying the Talus will award Link a Silver Rupee.

In Age of Calamity, the Frost Talus is one of the variants of the Talus that are encountered, first appearing in the Anti-Ice Training: II challenge. They later appear during the Winged Escort, Reclaim the Land, and Zora Mettle challenges. The talus will launch ice attacks out towards a nearby warrior, which can freeze the warrior temporarily if they make contact.

Frost Talus often drop rare gems as rewards, including Flint, Amber, Opal, Sapphire, and Diamond. After each Frost Talus is defeated, the player will receive a Stone Talus Trophy. These can be used to complete quests or upgrade weapons of the various warriors.