The Forest of Time is the location where Link first starts his journey. After landing in Labrynna, he can travel one screen north where he will find Impa surrounded by a couple of Octoroks. After scaring them off, Impa and Link will travel northward where they will eventually meet Ralph and Nayru. It is here where Veran will make her first appearance and take possession of Nayru. Veran will then escape to the Past through the Time Portal at the northwest corner of the Forest of Time. 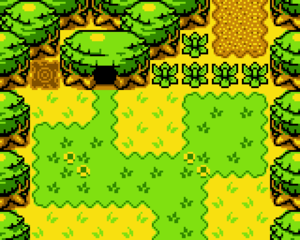