Fairy Fountains are recurring locations in The Legend of Zelda series. They are places where Link can recover health by the use of fairies. They have appeared in many games with different appearances that may vary from location to location, but all function in a similar manner. Fairies found in these fountains, with the exception of those in Majora's Mask, can be bottled and used as recovery if Link loses all of his hearts. 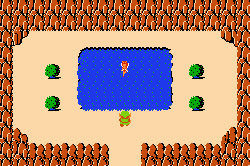