Difference between revisions of "Electric Keese"

This article is about the enemy from Breath of the Wild. For the similar enemy from Skyward Sword, see Thunder Keese.. 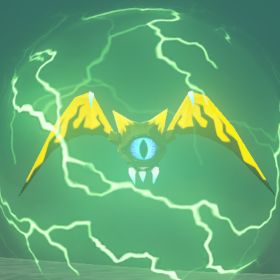 Electric Keese are electrified enemies in The Legend of Zelda series. They first appeared under the name in Breath of the Wild, although similar enemies appeared in Skyward Sword.

"The electricity that engulfs the bodies of these bat-like Keese makes them more dangerous than the standard type. They're capable of shocking anything they touch."

Electric Keese are engulfed in electricity, and have just 1 HP. They will hover around Link for a short amount of time before charging at him, shocking him and causing him to drop any metal weapons. Striking them with metal weapons will produce the same result, so it's recommended to snipe them with arrows or to use non-metal weapons. Upon death, they may drop some Electric Keese Wings or a Keese Eyeball.

Electric Keese will attract lightning during thunderstorms. Also, unlike normal Keese and much like other elemental Keese, they do not flock.

Electric Keese in Age of Calamity appear in similar fashion as their Breath of the Wild counterparts. They are weak enemies and will be defeated with just a single attack. They will occasionally charge up an attack and shock the warrior that they are targeting. Upon being defeated, they may drop an Electric Keese Wing or a Keese Eyeball. After each Electric Keese is defeated, the player will receive a Keese Trophy, which can be used to complete quests or upgrade weapons of the various warriors.