Dorian is a character in Breath of the Wild. 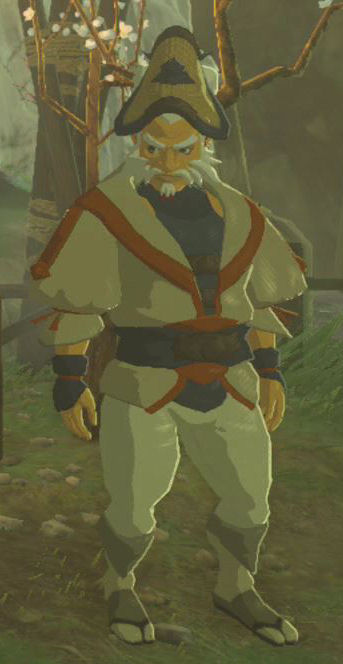 Dorian in front of Impa's house.

Dorian lives in Kakariko Village alongside his two young daughters, Koko and Cottla. His deceased wife is buried just north of the village, although Dorian has not revealed to his daughters that their mother is gone. He lies to them, to avoid telling them the truth. However, his older daughter Koko has become aware of this, while his younger daughter Cottla still thinks her mother is around somewhere.[1][2]

Dorian and Cado are two of the guards that protect the entrance to Lady Impa's house within Kakariko Village. Dorian wears traditional Sheikah clothing and when Link first approaches, Dorian and Cado initially give resistance to allowing Link to pass. Upon seeing the Sheikah Slate, Cado realizes who Link is and the two guards apologize. [3][4] Dorian indicates that Impa has been waiting quite some time for Link to arrive.[5] Before Link meets Impa, Dorian and Cado will never leave their guard, always standing at the base of Impa's staircase.

After speaking with Impa, Dorian will then take on a more traditional schedule. He stands guard in front of Impa's house for most of the day and will tell Link about the various shops in the village, as well as the local Inn.[6] He also mentions the Great Fairy Fountain that is up the hill from the village. He's too intimidated to visit the fairy fountain himself, but encourages Link to do so.[7] Dorian will stand, regardless of the weather, stating that the Sheikah clothing that he wears is actually quite comfortable and is resilient to move rain and lightning.[8]

Dorian's guard duty will end at midnight, at which point he will walk home.[9] At nighttime he will take off his hat and sits right beside the bed of his two daughters. He remains awake for most of night, as he is having trouble sleeping.[10] This is likely due to his wife recently being killed by the Yiga Clan.[11]

After sleeping for 4-hours, Dorian will awake at 8am, where he sits underneath a tree just outside his home. He chats with his two daughters, telling them stories about the village. [12][13] Dorian will tell the story about the Great Fairy that can be found up the hill, beyond the shrine. He tries to scare off his daughters so that they don't venture too far away. It works on Koko, but the curiosity just encourages Cottla to explore.[14][15] At 11am, Dorian will get and will head back to work, guarding Impa's house.[16]

Dorian is actually an ex-member of the Yiga Clan, who was sent to Kakariko Village as a spy, but fell in love with a local woman there. Behind the Yiga's back, he ended up having two daughters. These daughters made him want to sever ties with the clan. In retaliation to the deviation, the Yiga murdered Dorian's wife in cold blood as a reminder of his loyalties, with threats of his children being killed keeping him in line.