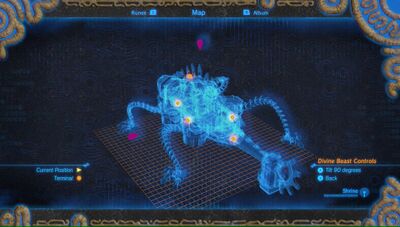 Link must free Yunobo from a cave-in at the Abandoned North Mine. After doing this, and talking to Bludo, he must meet Yunobo at the Bridge of Eldin and defeat the Moblins bullying the young Goron.

This done, Link must shoot Yunobo, using the nearby cannon and a remote bomb, with Daruk's Protection making the latter resilient enough to take being used as a cannonball. They must then travel up Death Mountain, avoiding the sentries on the way - either Link or Yunobo being spotted triggers a massive eruption, forcing them backward - and periodically using more cannons to shoot Yunobo at Vah Rudania itself, until it retreats into the crater. Link then follows, landing at the entrance to the Divine Beast.

Shoot the eyeballs. Get chests. Grab chest with the torch. Use the torch to light the unlit torch near the door with the blue flame. Do the same in the next room. Activate the unit. 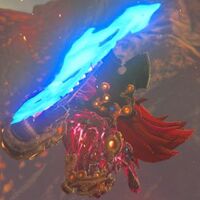 After activating the main control unit, Link cannot reenter Vah Rudania. However, as part of the EX Champion Daruk's Song DLC quest, he can present three Rudania's Emblems and be drawn into an "Illusory Realm" of memories, where he can re-experience the fight with Fireblight Ganon with limited equipment.