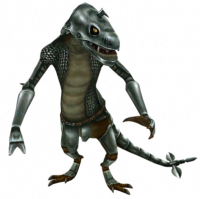 Dinolfos, also known as Dynalfos, are recurring enemies in The Legend of Zelda series. They are commonly found throughout the overworld and dungeons. Dinolfos appear to be well suited to fight and tend to be harder to defeat than their less armed counterpart, the Lizalfos. Upon sighting Link, this creature immediately runs up to him and begins its attack.