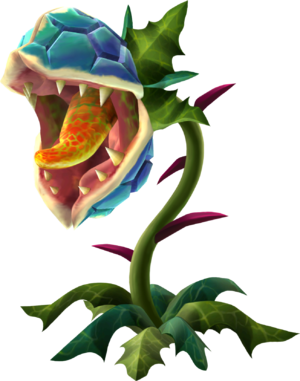 Deku Babas are common carnivorous plant enemies that appear in Ocarina of Time, Majora's Mask, The Wind Waker, Twilight Princess, Spirit Tracks, and Skyward Sword. There are several types of Deku Babas as well as other enemies with very similar characteristics.

Deku Babas in Ocarina of Time can be found within the Kokiri Forest, Inside the Deku Tree, Forest Temple, and the Bottom of the Well. They have a large, bulbous head that is blue in color with purple speckles around the mouth. The inside of their mouth is a textured red and pink, and there are no noticeable teeth. Their body, in relation to their head, is very thin and green. They have little means of defense besides their lunging bite that they use to intimidate and attack with when provoked.

When Link approaches a Deku Baba, it reveals itself and lunges out with a fierce bite. The most effective forms of defense against a Deku Baba are to block with Link's shield or to simply back away. Since a Deku Baba is attached to the ground, it can only lunge out the length of its stem. Link can use projectile attacks such as a Deku Nut to stun a Deku Baba.

In addition to standard Deku Babas, there are two variations of the enemy in the form of a Big Deku Baba and a Withered Deku Baba.

Deku Babas in Majora's Mask appear in an identical fashion as they did within Ocarina of Time. Deku Babas remain forest enemies, and they can be found within Termina Field, Southern Swamp, Woodfall Temple, and Sakon's Hideout.

Withered Deku Babas also make a return in Majora's Mask and can be found in similar forest areas where standard Deku Babas can be found. Additionally, there are two new variations of a Deku Baba in the form of a Bio Deku Baba and a Mini Baba.

Mini Babas are tiny variations of Deku Babas that completely lack stems. Thus, these creatures cannot reach out and harm Link. They can only hurt Link if he walks right into them. They are found exclusively within Southern Swamp and within underground caverns of Termina Field.

Deku Babas do not actually make an appearance in The Wind Waker. However, a very similar enemy known as a Boko Baba does and it shares many of the same characteristics.

Boko Babas are carnivorous plant enemies that live in the Forest Haven and the Forbidden Woods. They share many similar physical features and attributes with Deku Babas.

Deku Babas in Twilight Princess share many of the same characteristics as their Ocarina of Time and Majora's Mask counterparts, but they also have new abilities. This time, its head actually grasps on to Link when it bites him and it holds Link between its jaws. Link has to move around quickly or perform a Spin Attack in order to free himself from the plant's grasp. Deku Babas can be taken out easily by stunning them with a projectile weapon, then slashing them with Link's sword. After defeating a Deku Baba, its head dries up into a small sphere. This can be broken up to find Pumpkin Seeds which serve as an ammunition for Link's Slingshot.

Baba Serpents are a special type of Deku Baba that does not die when its head has been separated from its stem; but instead, it slithers along the ground, chomping its teeth and occasionally lunging towards Link. It slithers on the ground much like a snake would, hence the name Baba Serpent. Once it has been detached from its stem, Link must attack it, or it grabs a hold of Link. The only way to get out of its grip is to perform a Spin Attack. Baba Serpents can also be found hanging from the ceiling. Again, using projectile weapons to stun them can be very helpful. If left alone, these Baba Serpent can re-attach to their base to form Deku Babas.

A Big Baba is a much larger version of a Deku Baba found within the Forest Temple and the City in the Sky. These creatures have much larger range due to their long stems. Once one has been defeated, it turns into a Deku Like. Throw a bomb into it to finish it off.

Twilit Parasite: Diababa is a large, three-headed version of a Deku Baba. It serves as the boss of the Forest Temple. Link can use the dungeon item, the Gale Boomerang, to whirl a bomb into its mouth, knocking its head to the ground and temporarily stunning it. From here, Link can use the sword to attack the hidden eye inside the monster's mouth.

Shadow Deku Babas can be found in the Palace of Twilight as well as the Twilight-covered Faron Woods, Kakariko Gorge, and Hyrule Field.

Deku Babas do not actually make an appearance in Spirit Tracks. However, a very similar enemy known as a Fire Baba does and it shares many of the same characteristics.

Fire Babas are very similar to Deku Babas in that they are plant-like creatures sprung from the ground. Unlike standard Deku Babas, these creatures do not initially attack Link by biting him. Instead, they shoot fireballs toward him. If Link can separate its head from its stem using the Whip, the Fire Baba tries to bite Link. They are found in the Goron Village and the Fire Sanctuary.

Deku Baba with a vertical mouth

Deku Babas in Skyward Sword resemble their earlier counterparts, but the method to defeat them has changed quite a bit. No longer can Link just use the sword to cut off the head of Deku Babas, but instead, he needs to make precision sword slashes in the proper direction in order to harm them. There are two variations of Deku Baba within Skyward Sword, a standard blue one, as well as a more powerful golden variation.

Deku Babas come out from underground and try to bite Link if he gets too close. They open up their mouths horizontally or vertically and Link must use a proper sword slash to separate their mouths into two. Alternatively, Link can toss or roll a bomb towards a Deku Baba and it gobbles it up, causing the bomb to explode within its mouth.

Link can find Deku Babas in the Faron Woods, the Skyview Temple, certain time-shifted areas of the Lanayru Desert, and Sky Keep.

A Deku Baba is featured as a sticker within Super Smash Bros. Brawl. The sticker gives a bonus of +4 to arm and leg attacks and can be applied to anyone.