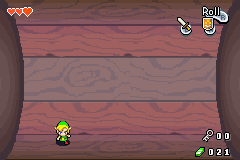 Link inside the barrel found in the dungeon.

The Deepwood shrine is the first dungeon in The Minish Cap. It is located deep within the Minish Woods. Link enters it while in minish size, so every litlle enemy here will be normal-sized (except for the boss).

As the dungeon is inside a forest, many aspects of the dungeon resemble it. It contains mushrooms, water and bugs. The Dungeon Item Is the Gust Jar, witch can suck/blow air. Link uses the gust jar to navigate in the lilypads on the water, since the Flippers are not available at the moment.

File:Mc heart 03.PNG After beating Madderpillar and sucking one of the spider webs;

While this is regular sized green chuchu as a human, it appears as a gigantic giant creature when you are a Minish.