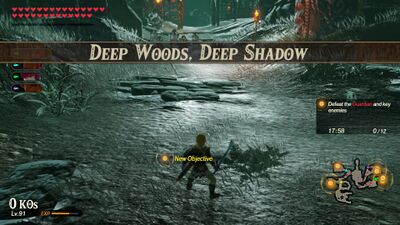 "Abhorrent magic is at work in Damel Forest. It's likely many powerful enemies lurk there... A challenging battle awaits!"

Deep Woods, Deep Shadow is a challenge scenario of Hyrule Warriors: Age of Calamity, unlocked by completing the Defend Hyrule Castle challenge. Play as any four unlock warriors and defeat the key enemies. Initially there are 10 enemies, consisting of two Guardian Skywatchers, a Fire Guardian, two Stone Taluses, an Ice Hinox, Stalnox, three Fire Moblins. Once they are defeated, two Silver Lynels will appear near the center of the forest. Defeat them both to complete the challenge.