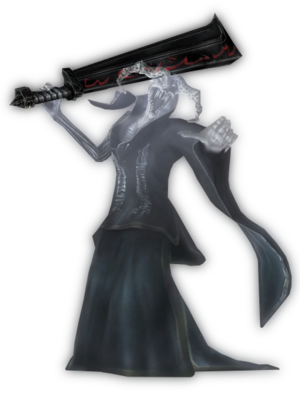 Death Sword is the mini-boss of the fourth dungeon in Twilight Princess, Arbiter's Grounds. Death Sword is an undead spirit, wielding a heavy, dark sword for a weapon. As Link first enters Death Sword's lair, he will come across the large, black sword embedding in the ground. Only when Link breaks the seal on the sword by slashing at the ropes with his own sword does the battle commence.

In the beginning, all Link will see is a giant sword flailing across the room. By turning into Wolf Link and applying his beast senses, the true form of Death Sword will be revealed. At this time Link, remaining in wolf form, will need to attack the spirit after it strikes with its sword. After a number of successful hits by Wolf Link, Death Sword will become fully visible.

Before the battle with Death Sword, its sword is found embedded in the floor in a multitude of ropes covered with Ofuda. Ofuda is a type of household amulet or talisman, which is issued by a Shinto shrine and hung in the house for protection from general harm like disease, accidental fire or other things.