Death Mountain from Ocarina of Time

Death Mountain is a recurring location in The Legend of Zelda series. Its inhabitants are often Gorons, but Ganon has had his lair in Death Mountain also. Sometimes it is just a mountain, but in most games, it is an active volcano. The mountains often have similarities throughout the series, and some are considered to be the same. It is located in Hyrule. 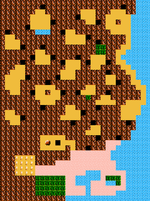 In The Adventure of Link, Death Mountain is found in the south-east of Western Hyrule, south of the Water Town of Saria only after showing Bagu's note to the River Man. While not a dungeon in its own right, the horde of Daira, Octoroks, Bago-Bago and a complex labyrinth of caves make it as challenging as any of the Palaces. Link's reward for battling his way to the southern end of the area is the Hammer. If Link breaks the boulder next to the cave where the hammer is discovered and walks into that space, he also finds a Magic Container hidden in a cave. Close inspection of the far south of the region reveals a scaled-down version of the Overworld from the The Legend of Zelda.

In this game there are three dungeons that can be found on Death Mountain: Turtle Rock and Ganon's Tower in the Dark World and Tower of Hera in the Light World. Just as in The Legend of Zelda, it is inhabited by Lynels, Tektites and Boulders. Normally Link would need permission from the King of Hyrule to enter Death Mountain, but since Agahnim was in charge there wasn't any need for one. The spring that can be found in The Legend of Zelda doesn't exist in this game, although there is a waterfall and a river that create Lake Hylia.

In this installment Death Mountain is home to the Gorons and has a Crater that can be visited. The Great Fairy and Fire Temple reside within the Crater while on the outside there are Tektites and Dodongo's Cavern. But Ganondorf blocked the path to Dodongo's Cavern with a boulder and the Gorons needed Link's help to destroy the monster within the cave and the boulder itself so they could eat the "Delicious" rocks. There is also a Great Fairy on top of the mountain, but the path up to the mountain is difficult since there are falling rocks that can damage Link. Kakariko Village can be found beneath the mountain, and the entrance to Death Mountain is guarded.

In Four Swords, Death Mountain is a volcanic mountain. It is one of the first three stages of the game where the Links battle with Gouen to find the Great Fairy.

Death Mountain is above Hyrule Castle, just as in Four Swords. It is the third stage of the game. It consists of three parts: Death Mountain Foothills, The Mountain Path and the Tower of Flames. Tingle's Tower can also be found here.

In Twilight Princess, Death Mountain is located to the east (GCN) of Hyrule. The trail leading up to the Mountain is connected to Kakariko Village. The trail up to Death Mountain leads to the second dungeon of the game, the Goron Mines. The volcano itself is not as violent as the Death Mountain seen in Ocarina of Time; however, the volcano does erupt during the early stages of the game. The mountain itself seems to be active in different ways, as there are now lots of small craters that emit a hot steam that can harm Link. There are also other geological features such as Hot Springs.

Gorons once again mainly inhabit the area; however, they act very different at the beginning of the game than they acted in past installments. At first, the Gorons are hostile with the Hylians if they try to go up the trail. If Link attempts to go up, the Gorons roll viciously at Link knocking him down. Link must acquire the Iron Boots from Mayor Bo, at which point he is able to stand his ground against the physically gifted Gorons. Once Link challenges the Goron Elder Gor Coron to a sumo match and beats him, he earns the respect of the Gorons. Gor Coron then reveals to Link why the Gorons have been hostile to the Hylian; their leader, Darbus, touched the treasure they have guarded from the command of the Golden Goddesses and turned into a monster. They locked him up, and did not want the Hylians' help. Gor Coron asks Link if he can help them and save Darbus, and if accepted, Link can enter the Goron Mines. Once he has defeated Fyrus, he receives the second Fused Shadow, and the mountain returns to its once calm state.

The music that plays on Death Mountain is a remix of the track from Ocarina of Time.

Can not find this korok seed, please type here if you can find it.

There is a level in Battle Quest that is called the Death Mountain Climb. In this level, players will climb up the side of a mountain killing enemies.

Death Mountain is a stage featured in Hyrule Warriors. Its first appearance is as the first stage in the Ocarina of Time branch in Legend Mode. The scenario for this stage is entitled, "Land of Myth". It is within this stage that the character encounters Darunia, who has kidnapped Ruto.