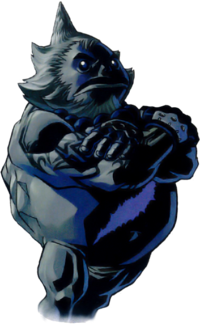 Darmani, Darmani III or Darmani the Third, was a great hero among the Gorons at the Goron Village and was beloved by all his peers, especially the Goron Elder's Son, who called him "Darmi". He is the third generation to be named Darmani. A demon had been wreaking havoc on Goron Village, and Darmani, being the hero that he is, decided to destroy it.... by himself. He thought that he could drive away the demon, all alone. Sadly, Darmani did not make it to the Snowhead Temple, and now lingers as a spirit.