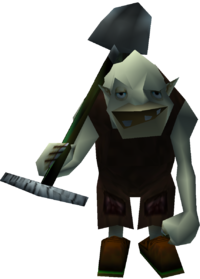 Dampé is a character that has appeared in five The Legend of Zelda games. In each game, he is the gravekeeper of each respective game's Graveyard.

In Ocarina of Time, Dampé is the gravekeeper of the Kakariko Village Graveyard. During Link's childhood, Dampé can be found patrolling the graveyard at night and starts his own Gravedigging Tour, upon request for 10 Rupees, digging up anything from Rupees to a Heart Piece that Link can pick up.[1] The items that he digs up appear randomly. During the day, he is at his shack sleeping, and if Link tries to interact with him, he tells the young hero to go away.[2]

Sometime during Link's seven year slumber, Dampé dies and becomes a ghost. When Link digs up his grave, he can find Dampé's ghost in a maze beneath the grave. Dampé challenges Link to a race, and if Link wins, Dampé allows him to take his treasure, the Hookshot.[3][4] Playing again and winning in under a minute earns Link a Piece of Heart.

In Majora's Mask, Dampé is the gravekeeper of the Ikana Graveyard, which is a haunted graveyard, yet he is afraid of ghosts. On the Final Day, Link can find Dampé Beneath the Graveyard, where he admits to be searching for the Ikana Royal Family's treasure. However, he lost his lantern and cannot see. He, in turn, asks Link to guide him using the light of his fairy, Tatl.[5] Leading him to the Soft Soil spots causes him to dig there.[6] After he has dug up three Blue Flames, a Big Poe appears. Since Dampé is afraid of ghosts, he runs away to his house, and if Link defeats the Poe, he is rewarded with a chest that contains an Empty Bottle.[7]

Dampé lives in a home alone in The Swamp, the second stage of Near the Fields in Four Swords Adventures. Interestingly, his name is not spelled with an accent when he introduces himself. His house is found in the northwest of the graveyard, near a Moon Gate, and it is surrounded by many Giant Ghini. In order to enter it, the Links must stand on four different switches to light up the area and drive the ghosts away. When they enter, Dampé warns them about the dangers of being outside, and then he tells them a story about the Dark Mirror.[8] He is the only living person in the stage.

Dampé is also featured in The Minish Cap. He lives in a house in the Royal Valley and tends to the graveyard. He gives Link the key to the graveyard, opening the way to the Royal Crypt. When spoken to after completing the mini-dungeon, he will state a secret path in the Lost Woods that leads to fifty Rupees.

In A Link Between Worlds, Dampé once again appears as the Gravedigger. He cares for the Graveyard found east of the Sanctuary.