Difference between revisions of "Cyclos" 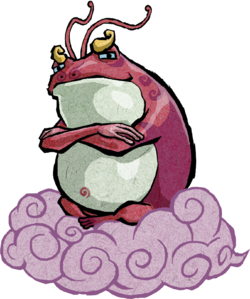 Cyclos is one of the two frog-like Wind Gods in The Wind Waker. His brother is another frog-like wind deity named Zephos, and their monuments are found in the Wind Shrine behind Dragon Roost Island, each with a song engraved on them. However, Cyclos' monument holding his song had been destroyed, and as told by Zephos to Link, in a fit of rage, Cyclos placed cyclones across the Great Sea.

Link is (sadly) able to fall victim to his furious cyclones, which blow Link to another area of the Great Sea. Cyclos floats on a cloud at the top of his giant cyclone, impervious to all attacks except one. Link is able to strike Cyclos with the Hero's Bow, acquired in the Tower of the Gods dungeon. When Link encounters Cyclos, he must shoot arrows at him through the raging winds in order to stop his rampage and calm him down. However, if Link is unfortunate enough to not have the Hero's Bow yet, he will be blown away to another area of the Great Sea.

When Link defeats Cyclos, he ceases his giant cyclone and floats down, apologizing for his rage. He then points out that Link carries the Wind Waker. Impressed, Cyclos' attitude changes, and he teaches Link the Ballad of Gales. When played, the Ballad of Gales gives Link the ability to call for Cyclos' cyclones to warp him to certain locations on the map of the Great Sea. The song is only usable when Link is on the King of Red Lions and out on the Great Sea.