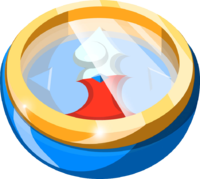 The Compass is a recurring Dungeon Item in The Legend of Zelda series. The Compass locates the Boss and Treasure Chests in dungeons. However, it has a different use in every game it appears in. The Compass appears in numerous games, and it is a very useful item. There is always one Compass in every dungeon.

The Compass in The Legend of Zelda is used to find the location of each Triforce Shard that lies within any and all dungeons in the game. However, in Death Mountain, the final dungeon of the game, it cannot be used to locate a Triforce Shard because Link has already collected them all. Instead, it is used to show where Princess Zelda lies in the dungeon via a blinking dot on the map. It is usually found at the beginning of the dungeon to give players a sense of where to go.

The Compass in A Link to the Past displays the location of the Boss on the map. It also displays what floor Link and the Boss are on.

The Compass in Link's Awakening displays the location of each Treasure Chest and the Nightmare. However, it also has a new feature; it beeps whenever Link enters a room with a Small Key or some other secret.

The Compass in Oracle of Seasons and Oracle of Ages tells Link where all Treasure Chests are located in each dungeon. It also displays where the Boss is located. Similar to the Compass in Link's Awakening, this version of the Compass beeps whenever Link enters a room that has a Small Key in it.

The Compass in The Minish Cap displays the locations of Treasure Chests and the Boss.

Spirit Tracks does not have a dungeon Compass, but rather an item called the Compass of Light. This Compass is used by Link to reveal the location that Malladus and Chancellor Cole are hiding in, which is revealed to be the Dark Realm.

The Compass in A Link Between Worlds makes all unopened Treasure Chests in a dungeon appear on the map. Every dungeon has a Compass inside, usually located within a Treasure Chest.