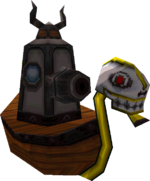 The Cannon Boat is an enemy found in Phantom Hourglass and Spirit Tracks. They attack their targets by firing bombs from afar. Link can destroy Cannon Boats by getting close to them and firing bombs with the Cannon.

Cannon Boats are usually found in groups of two or three. They are sometimes accompanied by even larger Pirate Ships. It will take five hits with the Cannon to knock out a Cannon Boat. Once it is defeated, the Cannon Boat will tilt over and slowly sink down into the ocean.

Cannon Boats appeared in Phantom Hourglass and are killed in the same way in Spirit Tracks. Shoot two cannonballs at them and the boats will sink into the water. The boats themselves attack by shooting cannonballs at the Spirit Train, which can be blocked by destroying them with the Train's own cannonballs.