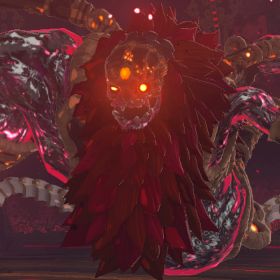 The battle with Calamity Ganon will be substantially different, depending on whether you’ve completed much of the game or not. If you have not defeated any of the four Divine Beasts, then whichever bosses you haven’t fought will appear here in Hyrule Castle, so you might need to take on Waterblight, Windblight, Thunderblight, or Fireblight Ganon. Not only that, but they would be in a gauntlet, one after another, and once you beat them, you’d then take on Calamity Ganon. If you die at any of them, you start over.

Calamity Ganon is basically a greatest hits of the four Ganon’s that we fought in the various dungeons and he mimics many of their attacks. He will shoot ice blocks at you like Waterblight Ganon, at which you can use Cryonis to melt them away. He will create a field of thunder spikes like Thunderblight Ganon, at which you should just run away. He will create tornado gusts like Windblight Ganon and you should just sprint away. He’ll also use a slow laser shot attack. He’ll also take one of Fireblight Ganon’s attacks, launching a ball of fire at the battlefield. If you see this, shoot it with an ice arrow before it can ignite the battlefield, or just run away.

In our experience, the Perfect Dodge is by far the best method. Not only that, successfully doing one sets up a Flurry Rush, and you can get a number of attacks in during the slow-motion scenes. In particular, I think this is most effective when he is trying to strike you with his large fire sword. If he tries a horizontal slash, do a backflip just before the sword hits you. If he tries a vertical slash, do a side jump. With proper timing and enough practice, you’ll be able to knock Calamity Ganon down.