Brigo is a character found in Breath of the Wild. 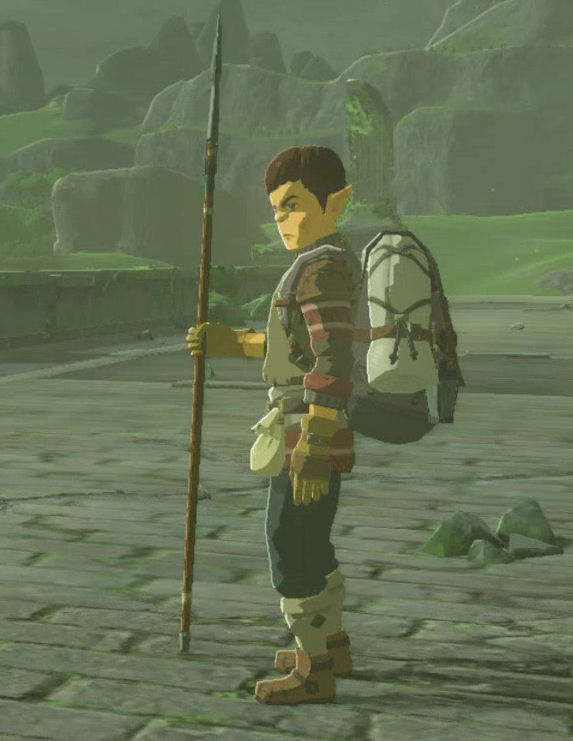 During the daytime, Brigo can be found patrolling back and forth on the Proxim Bridge. He loves to chat, but when it begins to rain, he will take off, running for his camp just to the east of the bridge.[1][2][3][4]

When approached, he can be heard talking to himself, speaking about the doom and gloom of the present situation. Brigo is overwhelmed by all the changes that have been happening lately, including the Sheikah Towers that have risen from underground, and the Shrines that have started to glow.[5]

With all that has happened, Brigo is now eyeing the Guardian in the distance. He refers to the Guardian as an overturned urn and tells Link of a story about how a Guardian once chased him down and tried to kill him.[6] Brigo explains that the guardians that nearly killed him was closer to the castle, but he barely escaped. He goes on to say that guardians are still active closer to Hyrule Castle and that Link needs to be careful.[7]

Brigo wields a Traveler's Spear and he patrols the bridge as it is an important route. He uses his weapon to chase off any monsters, so that they don't make the bridge a home.[8]

Brigo also serves as a travel guide and will provide directions to Link to nearby places.[9] In particular, Link usually crosses the Proxim Bridge as he is headed towards Kakariko Village. Brigo explains that Link should follow the path to the other side of the Dueling Peaks, where he will find the Dueling Peaks Stable. From there, he can ask another traveler for further directions.[10] If Link asks about how to get to Hyrule Castle, Brigo will strongly advise Link to avoid going in that direction due to the Guardians, telling him it's much safer to stay put and look at the castle right from the bridge.[11] Lastly, Brigo explains that the Great Plateau is an abandoned location surrounded by monsters and is not sure how somebody could even climb up the steep cliffs.[12]

If Link climbs up to the edge of the bridge while Brigo is nearby, he will shout at Link, telling Link not to jump. While initially it appears he is concerned about Link's well-being, he is actually concerned about the trauma it would cause himself if he saw somebody jump to their death by leaping off the bridge.[13][14] He he relieved once Link comes down from the ledge.[15][16]

When Link is done chatting with Brigo, he wishes him good luck on his journey.[17]