Bows are recurring items in The Legend of Zelda series. They can often be upgraded with new types of Arrows and larger Quivers. The perks of having a Bow is that Link can attack enemies from range, not having to engage in melee combat with them or activate switches which cannot be reached by the sword. However, Bows are ammunition-based, so Link must keep supplying them with arrows.

The Bow is found in the first dungeon of The Legend of Zelda, Level 1: The Eagle. The Bow allows Link to fire off arrows at enemies. Before Link gains the ability to use it, he must first purchase the arrows from one of the Item Shops for 80 Rupees. Also, as opposed to possessing a limited number of arrows, firing an arrow drains Link's Wallet by one rupee.[1] The Bow is required to complete the game, because it is the only weapon capable of defeating Gohma, as well as Ganon. In the final dungeon of the game, Level 9: Death Mountain, Link receives the Silver Arrows, which do more damage and are required to defeat Ganon.

In the Second Quest, the Bow is found in the fifth dungeon of the game instead of the first.

Link obtains the Bow as the treasure of the Eastern Palace, also the first dungeon of the game. Link starts out with the ability to hold 30 arrows, but this amount can be increased by five if he donates 100 rupees to the Great Fairy in Lake Hylia. This is repeatable until Link reaches the maximum amount of 70. In a similar fashion to the original The Legend of Zelda, Link obtains the Silver Arrows from the Cursed Fairy inside the Pyramid of Power, which do incredible amounts of damage and are needed to defeat Ganon.

The Fairy Bow is found in the Forest Temple in Ocarina of Time. Link receives Fire Arrows by shooting at the sun above Lake Hylia and Ice Arrows by completing the Gerudo Training Ground. Also, Link receives the Light Arrows from Princess Zelda once he has awakened all the Seven Sages. Using the Bow puts the user in a first-person perspective, and the arrows arc upwards somewhat. Link's original quiver can hold 30 arrows and can be upgraded to 40 and 50 in the Kakariko Village Shooting Gallery and the Horseback Archery mini-game, respectively.

The Hero's Bow is obtained in the Woodfall Temple in Majora's Mask. It functions in exactly the same way as Ocarina of Time's Fairy Bow, with the only difference being in its appearance. Link also gets new types of arrows in every dungeon. Link acquires the Fire Arrows in the Snowhead Temple, Ice Arrows in the Great Bay Temple, and Light Arrows in the Stone Tower Temple. There are two Shooting Galleries, one in East Clock Town and another in the Southern Swamp. Beating either upgrade Link's quiver once. 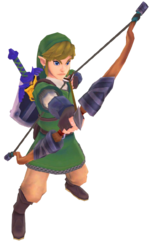 The Bow is received in the Sandship, and can be used to defeat far-off enemies, activate Timeshift Stones, and more. The controls are much different than that Link has ever since before. It is used with the Wii Remote in the right hand and the Nunchuck in the left. After holding C to nock an arrow, Link can pull back the Nunchuck, as if Link is pulling back the string on an actual bow, and release the C-button to shoot an arrow. This is the same control scheme that can be found in Wii Sports Resort for archery. As usual, Link can shoot enemies with the Bow, and items can be knocked off trees and other objects. Additionally, items dropped by enemies (such as hearts) can also be shot with the Bow and pinned to walls. By doing this, Link can reclaim his dropped heart as well as his arrow.

The Bow is found in both Level 1 of MAP1 and Level 1 of MAP2. As in The Legend of Zelda, it is useless until arrows are purchased from an Item Shop, after which each arrow costs 1 rupee to fire. The bow and Silver Arrows are required to defeat Ganon at the end of Week 4.

The Bow is found in the The Sorceress of the Woods Legend Mode scenario. It is required primarily to destroy Deku Babas.