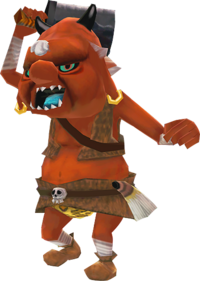 Bokoblins are an enemy found in the Zelda series. They appear as large rat-like creatures and come in a variety of colors. These enemies will often wield weapons and will attempt to attack Link if he comes within their range of sight. They appear in the most recent game, Skyward Sword, and are this time more Moblin looking.

Bokoblins had their debut appearance in The Wind Waker. They are a simple enemy that is pretty easy to kill, being the first enemy you fight in the game. They come in 3 variations: Blue, Green, and Pink. They will occasionally drop Joy Pendants after being defeated. Alternatively, you can use your Grappling Hook to steal their Joy Pendants.

The blue variation is the simplest one, as you may find them weaponless. If they are holding a weapon, it's either a Boko Stick, or a large sword.

The green variation is stronger than the blue, as they wield large swords and have shields, which they use to block with.

The pink variation is probably the smallest threat of them all, as the only weapon that it carries is a telescope. These Bokoblins are only found on watch towers or rafts around the Great Sea.

The Twilight Princess Bokoblins come in two variants, The Red Bokoblins and Purple Bokoblins. The Bokoblins can be found mostly in Hyrule Field, Also in dungeons. The Red ones are a little more tougher since they have a little more health, But the two variants are otherwise pretty much the same. The Warriors have long swords and will directly run at Link. The best way to defeat them is just slashing them with the sword, but bombs, arrows and many other items will do just fine.

Bokoblins have a much different visual look this time around, taking on a more moblin-like appearance. Some of them have small caps on top of their heads or wear leopard skin underwear, but these do not seem to have an effect on how they battle.

Bokoblins are common enemies, found in many different areas throughout the game. When they detect Link's presence (except for the Archer Bokoblins), they will sprint towards him and strike at him with their weapons. Some also hold horns which they will blow to call out reinforcements.

This variation of the Bokoblin has three different types: normal ones that wield swords or clubs, Archers, and Leaders.

This version of the Red Bokoblin wears a horned cap, leather vest and a leather loincloth. Normal Bokoblins wield rusty machete-like swords when found in Faron Woods and a club covered in spiny green vines when found around Eldin Volcano and block Link's slashes. They will move the sword from left to right, or hold it up, blocking directional attacks from Link's blade.

There are two main ways to defeat this type. You can do a carefully timed shield bash when they attack staggering them making an opening in their defense. This way is only useful when facing a one or two Bokoblin.

The second method of defeating them is taking the offensive and attacking the area that is not blocked by its weapon. This is a better tactic when facing multiple enemies because hitting a Bokoblin also staggers them leaving them open for additional attacks.

Bokoblin Leaders have the same look and tactics as the sword Bokoblins, the only difference being the horn it carries. If a Leader spots you he sounds an alarm calling backup. In the beginning of the only way to get rid of this horn is to kill the leader. Later on in the game when you obtain the whip you can use it to disarm him of his horn without killing him.

Archers are characterized by a skull cap and a bandanna covering its mouth. Every different colored Bokoblin archer behaves generally the same way. When they spot you they will raise an alarm much like the Bokoblin Leaders. Obviously the Archers attack from a distance. Although the archers range can be dangerous early on in the game it only takes one hit to take them out.

Archer Bokoblins are often found on towers. Link can use bombs to destroy the towers, bring the Bokoblins down with them. Unlike the other Bokoblins they will not sprint towards Link but will instead shoot arrows at him.

A new variation known as cursed bokoblin, are zombified enemies found in the underground section of the Ancient Cistern. They are slower than the normal variation and do not have a sword to block Link's attacks. However, they are difficult to kill since they can only be killed by a Fatal Blow. In the battle with Koloktos, it has the ability to summon some Cursed Bokoblins. They are much easier to kill, because you can kill the with an ordinary strike, and there is no need for a Fatal Blow. They come in groups of three or four. When you fight them outside the boss room they often appear in huge numbers and, sometimes, if Link does manage to defeat one, another will take its place. They are also able to follow Link across many obstacles, such as climbing ropes.

The Blue Bokoblin is very similar to the Red Bokoblin in that he has similar tactics and clothing although it is much tougher taking twice the damage of a red one.

Green Bokoblins wield hammers and are seen to be wearing white skull caps and tooth necklaces. They are basically a dungeon version of the red Bokoblin, but take slightly more damage.

Technoblins are ancient Bokoblins that had access to high tech weapons. These Bokoblin are found when a Timeshift Stone is activated near a Bokoblin Skeleton in Lanayru Dessert. The tactics for defeating this variation are the same as any other sword wielding Bokoblin. Link must be extra careful not to hit the sword they carry as it is electric and can be very dangerous to Link. If Link's sword makes contact with this weapon he is shocked and looses one heart. When using a Shield against this type it is best to use the Wooden Shield, Sacred Shield, or Hylian Shield because one strike from it's weapon will disintegrate an Iron Shield. When fighting a technoblin if you knock it out of the time rift zone it turns back into a skeleton.