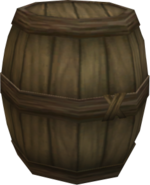 Barrels are objects that have appeared in many The Legend of Zelda games. Barrels usually reveal pick-up items such as Bombs, Rupees, Recovery Hearts, and Arrows.

In some parts of the ocean of The Wind Waker and Phantom Hourglass, explosive barrels float on the water. These blow up if Link's boat sails into them. In Phantom Hourglass, they can be avoided by re-drawing Link's sailing route whenever he is on a collision course with one of them; however, this can be tedious. A better way of dealing with them is shooting at them with Link's Cannon, thus making them explode before hitting them with the boat.

Barrels also appear in The Wind Waker's Forsaken Fortress as a way to sneak past the dungeon's Moblins.