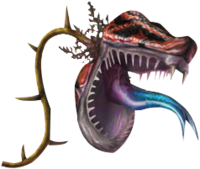 Baba Serpents[1] are enemies that appear exclusively in Twilight Princess. These enemies are related to the Deku Babas, but these creatures have a red husk with black stripes, a yellow vine, two fangs, and a blue and purple tongue. Also, Baba Serpents are larger and more ferocious,[2] growing from a yellow and red pile of leaves. Baba Serpents are first encountered in the Forest Temple.[3] Later, this enemy can be found in parts of Hyrule Field to the west of Castle Town and directly south of the town. The Baba Serpent also appears in City in the Sky and on the third and forty-second floor of the Cave of Ordeals.[4][5]

If Link tries to hit its head, the Baba Serpent does not take any damage from it.[9][10] As a result of this, Link needs to wait for the creature to rise up and expose its vine, so he can attack it with his sword or a ranged weapon like the Clawshot.[11][12] Even with Link cutting their stem, the Baba Serpent is not defeated and will try to clamp onto him like before.[13] As a result of being detached from their roots, Baba Serpents can now crawl around the room, being a more dangerous foe to Link. When trying to clamp onto him, the Baba Serpent hops across the room to attack him. Like before, if he is trapped by the crawling Baba Serpent, Link must use the Spin Attack to escape, damaging the enemy also. After Link has separated the Baba Serpent's head, he can use the sword to slash it or any projectile weapon to defeat it.[14][15]. If he journeys too far from the Baba Serpent when it is separated, it will crawl back to its roots and reattaches itself to it, making Link having to cut the vine again.

Baba Serpents can also be found hanging from the ceiling like a Bio Deku Baba. This is first seen in the Forest Temple when Link is battling Ook. At the beginning of the battle, he uses the Gale Boomerang to cut off the stalk of two Baba Serpents from the ceiling and continues to do so throughout the battle.[16] Foreshadowing later ways to battle the Baba Serpents, Link can use many projectile weapons to separate them, but not allowing Link to cut the vine with his sword. Like Ook, he can use the Gale Boomerang to break the Baba Serpent's stem.[17] Also, the Hero's Bow can be used to separate the enemy by using a Bomb Arrow to blow up many Baba Serpents.[18][19] Finally, he can use the Clawshot to detach them.[20] However, Link must be careful if he is using the Clawshot to separate a Baba Serpent on a grate in City in the Sky because if he misses the stem, he will target the grating near the enemy and be propelled to that area, falling off when the Baba Serpent attacks him.[21]